Posted by Lindsay Hutton at 5:33 PM No comments:

A message from Murray...

The only covers band that I've ever really liked was the Ramonas - an all girl Ramones tribute. The New Edinburgh Dolls asked me if I'd like to put together a similarly styled tribute band and although my initial thoughts were to say no I thought "I'll get my pal Lizzy to be Izzy Pop and put together an all girl stooges band !"

The all girl bit didnt materialise, but come see us play some good songs badly at bannermans tomorrow, we've got two guitarists and a sax player so its going to be a big bad sound and visually should be a lot of fun, we'll be onstage at 9pm, followed by the New Edinburgh Dolls comeback and farewell show - this will never be repeated so if you're out on the town tonight (Friday), pop in, its only 3 quid !

Bannermans gigs now always finish at 11pm so dont toddle along at midnight thinking you'll just catch the N.E.D.'s !
Posted by Lindsay Hutton at 10:36 AM 1 comment:

I miss Borders books. And of course prior to that, Tower in Glasgow. Where you could go in and graze all the new magazines are gone. Oh, I bought stuff too and my attic is a testament to having kept print sales alive in my time. So enough with the huffing and puffing. Yesterday, on my way to Stereo - I was reduced to WH Smith and got a little depressed when I picked up and N*E for the first time in forever. Mainly to check out the new "design". I'll be hornswaggled if it hasn't got all the hallmarks of a Sunday supplement. Dearie me and not a snip at £2.30 a go. And what a great idea, make it available with 10 different covers each featuring an artist that I would take a big detour to avoid.

And the Uncut CD this month is a "Punk before Punk" compilation. A dear friend remarked to me via text from Sweden last night that "we're getting old" after hearing about Malcolm. I am for sure.

Anyway, enough of that... here's something to read that recalls the golden days of rock writicism... Don Waller on The Stooges and The Runaways.
Posted by Lindsay Hutton at 10:15 AM No comments:

The past has haunted me a little this past week. Furthest back was when I walked to the place that the Blood Donation bus on Wednesday. I was just sending an e-mail to Amy Allison about the “Glasgow overspill” and remembered that I walked past the area where my parents got their first house, a flat, where I lived with them. We moved when I was 9 or 10 maybe.

This is significant because it was here that I got my first real taste of pop culture. A rumour went out to the effect that Davy Jones of The Monkees was to visit his “aunt” in the next building. Of course it was bollocks but the crowd that showed up is something that I’ll never forget. It got a little ugly too as I recall when it was obvious that it wasn’t happening. I was only wee but recall that I could read the situation and got the hell out of there. The flats are still there but “the pipes” a play area where the youngsters used to gather are gone. That’s where we started to hang out with girls as teenagers. Listening to T. Rex on “cassette” a new format of the time.

Anyway, I was dropping off a Wild Horses photo on my way to the community centre and did so. As it turns out, when the lady opened the door – her son works but doesn’t live in the town – I recognised her immediately. She worked at the same stalag for years. Small world. From there to the blood letting and it was the place where we kids eventually ended up attending a Sunday night disco. That’s if your parents would let you go. And if they didn’t, you snuck there anyway. Of the many memories I have of that time, hearing “Please Stay” by The Cryin Shames is the most pertinent. I also recall partaking in an early form of “headbanging” to Deep Purple’s “Black Night” there. I walked around a lot of old parts of the town both coming from and going to the garage to pick up the car. It was in for a radiator replacement and somehow I was compelled to wander past and through areas of onetime significance for one reason and another.

Getting back to The Monkees thing, I often use the wind-up tactic to the effect of likening the Pistols to them. And sometimes Take That but I consider the former to be half true. The news of Malcolm McLaren was a surprise and obviously his work impacted greatly on all of us having changed the landscape of what would become possible. He was at the amazing Punk Kongress that took place in Kassel, Germany – late September 2004 and trotted out his manifesto like the entertainer he’d become. Even Johnny Lydon has used that description today in his soundbite. 64 though, blimey – and Alx was 59. This is all within my ballpark and it’s screaming at me to get things figured out. Of course, I’m pretending not to hear. Oblivious to the spectre of oblivion.

However, I am aware that I need to connect important factors of past and present and intoning “La la la” loudly isn’t going to fly for much longer. This I know. However, doing something about it is a whole ‘nother entchilada altogether. At this point, I’m more preoccupied with having to go back to work on Monday. Three days away. You don't have to tell me that's pathetic. i am patently aware. I hear pish about never looking back, that you should just look forward. As ever, irrespective of geography, status or social pecking order, I am generally drawn toward limbo.

And I ain’t talking about shimmying below an ever-lowering pole here. Or am I? 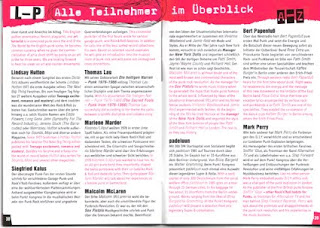 Posted by Lindsay Hutton at 9:25 AM No comments:

The mind dislocation continues with this that I discovered via Marc Campbell's phasebook post...

Posted by Lindsay Hutton at 8:20 AM No comments:

“Let’s Rock” lived up to its name then. In the subterranean lair that is the venue below the Stereo Bar. The decor is strictly “Owl Cave” after all. An ambitious project to stage 20 years to the day from the original air date and I’m pretty sure that, as Gerry Love remarked, a lot of those present probably never saw it then. Brogues g/f, Jane has NEVER seen it. Can you imagine how great it must be to be in that position?

In addition to the vibe and the music, there was coffee (no milk) – doughnuts/donuts and cherry pie and I can personally vouch that the CP was better than that served up in the Mar T, having been there. The short set by New Shoes (for Leo), thankfully not a Paolo Nutini tribute act hit the spot delivered a very excellent version of “Pink Room” and a twisted “Just You and I”.
I saw Tut Vu Vu before and they’re great. Glasgow’s answer to Oddjob even. They had some technical difficulties and your reporter had to leave for the train before they were done. There was a cassette release by them recently that I keep meaning to pick up.

So an unmitigated success then, kudos to Ms Tara Quinn for pulling off something that was not a tribute but a celebration. Put together with an eye for the all important detail. Bob never showed up as far as I could tell but you know how that one is. And nobody told the penguin joke but that might have been just too, too much.

All tolled, a chickadee on a dodge dart kind of an evening kids. I could maybe have done with Diane sending me some of those earplugs that Coop got to withstand the Icelander antics. Maybe I stood too close to the PA but my head is still ringing but in a good way.

Posted by Lindsay Hutton at 8:10 AM No comments:

One of the lines involved with where I've just come from is, "It's happening again". And it is...