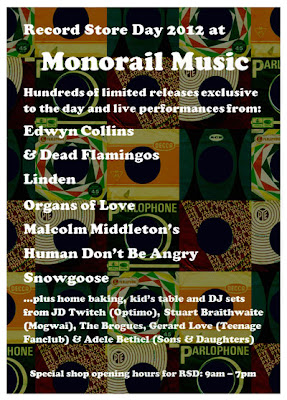 It's nearly "Record Store Day". If you're in Glasgow then here's what's going on. Forget the bullshit "on the day" shakedown and buy something from the regular stock. Leave the collectors items to the blighters that think they'll make a quick buck on ebag. Not a typo. May these individuals get fourth degree burned. Like everything else that starts off as well intentioned, this annual event has become everything that it set out not to be. Still, support your friendly neighbourhood dealer. That's the only message that matters. As I've said before, I find the home baking aspect a lot more interesting than most all of the instant collectables.

The Monorail/Mono roll call can be seen in the poster to your immediate right, the scene at Love Music is as follows...

Love Music in Glasgow will opening at 9:00 am with a free tea stall for customers.

Live music kicks aff at 1:30pm with a set from DOLALAY from Hollywood California, Dolalay have a Scottish singer, Rebecca Connelly and a new EP called "Days Like This". At 2pm Edinburgh group the CATHODE RAY will play songs from their brand new self-titled album that is BBC Radio Scotland's Janice Forsyth Show's Album of the Month for April. Late 70s New York angular meets post-punk Manchester. At 2:30pm there's WHITE HEATH, the Edinburgh group that released an album on Stow College's Electric Honey record label last year. Famous for having a trombonist instead of a bass player, they'll be playing their new 8-minute-long epic single "In A Glasshouse". At 3pm, FRENCH WIVES will perform songs from their forthcoming debut "Dream of the Inbetween" to be released May 7th on the Electric Honey label. They're just back from a North American tour that included SXSW and Canadian Music Week. 4pm for the return of WOODENBOX having dropped the Fistful of Fivers handle but gained a second album-full of great tunes coming later in the year. 4:30pm is Punk Rock Busker Time: a semi-acoustic set from Scots punks THE MURDERBURGERS whose new album "How To Ruin Your Life" will be available on the day. 5pm to close the festivities we're pleased to welcome back ADMIRAL FALLOW. We'll be selling freshly-pressed vinyl copies of their debut album "Boots Met My Face" an Official UK Record Store Day release, and they'll also be treating us to some songs from their forthcoming "Tree Bursts in Snow".

Good luck with grabbing whatever it is you feel the need to get your mitts on.
Posted by Lindsay Hutton at 10:03 PM No comments: