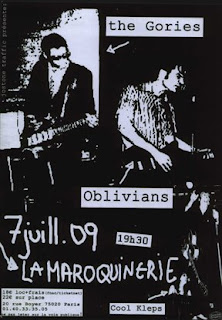 Brother Patrick caught the Oblivians/Gories double header in Paris the other night...

"La Maroquinerie has a capacity of 500 which made it the perfect place for The Gories and The Oblivians in Paris. It was completely sold out with a very mixed audience. It included old people like me who already saw both groups in the 90’s (Gories:1992/Oblivians:1995 & 1997) and younger people with excellent taste like Vox, Marie and my son Jonathan.

Most people seemed to have come out for The Gories and others, like me were here to see both combos. The Oblivians were first up to the plate.

In a recent Dig It! interview, Jack told me that they were so excited to play that every show will have a different set list. And it was true! It was completely different from Detroit and it included the seldom heard “Bum A Ride”. During the first 2/3rd, Jack played drums and then swapped places with Greg for more Oblivesque blues songs. Eric sang too, mainly his hardcore-ramone-esque love songs (!) like “She’s A Hole” or Jim Cole” (who got too much soul, I can’t stand it, ha ha). They were almost as great as they were in the old days. It would have been great if they’d played “Never Change” or “Vietnam War Blues” but we can’t have it all ways.

The Gories set was different from Detroit too. They opened with (my fave) “Baby Say Unh” and ploughed through a trove of classics like “You Little Nothing”, The Motions “Everything (That’s Mine)” and Leaving here" by Jimmy Hannah. Mick Collins did his Hendrix shtick during “Ghostrider and the feedback bled into the remainder of the show. He was great, but in my opinion - Peg and Danny really made things fly. Two encores ended with a singalong - “Hey Hey We’re The Gories”.

Time then for a beer (the place was hot) and meeting great people like Isabelle Chelley and her husband Thierry. She kindly gave me a copy of her new book and dedicated it with a very appropriate “Cramps” message. Then it was time to go say hi to the bands.

I asked Danny when the new Gories album will be released? “in your dreams” he answered. He also told me that a single by his new band, the Readies will come out soon on the Cass imprint. 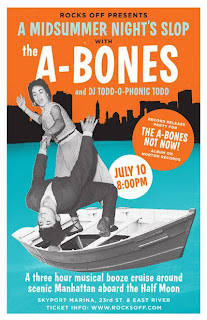 Posted by Lindsay Hutton at 7:12 PM No comments:

Thanks to Tam Coyle for this link via facebook. 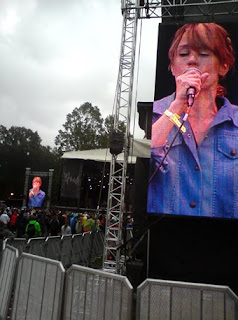 Hello Saferide at a very rainy Hultsfred just a wee while ago.
Photo by our man in the trenches, The Rt. Hon Per Hägred.
Posted by Lindsay Hutton at 6:16 PM No comments: 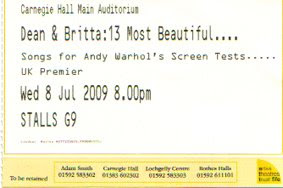 Last night, I was reminded that going to a show doesn't have to be an ordeal. The Carnegie Hall in Dunfermline is a great spot. A bijou proper theatre where the sound doesn't suck. Stop rubbing your eyes, it's true. In addition there's a nice airy bar and the whole-set up was a real eye-opener.

Of course there's the territorial, getting people to travel thing but education is never easy. Scotland is an odd place when it comes to getting people to come out or venture away from their comfort zone. First of all, pulling off this D&B thing was a coup of epic proportions. The big cities are used to having their own way but this was a genuine, on-off event. Not part of any treadmill or buck-sucking exercise. This was about bringing an evening of sophisticated and just plain ethereal music (and pictures) to an audience that would appreciate it. And here's another thing, the people who attended didn't spend the entire show yabbering on the phone or watching it via the screen on some device or other. I know. I wouldn't believe it either but you couldn't make it up. Not based on recent experience anyway.

So we've established that the setting couldn't have been more perfect. What about the show? It's such a rich mix that sensory overload is always a possibility. Some drama ensued when a circuit breaker tripped the power. Dean assured me that it wasn't part of the show. I think I mentioned before that Britta's version of "I'll Keep It With Mine" was spine -tingling but the live version raised the bar to a whole 'nother level. The sonic shimmer of the tambourine against the acoustics of the room were simply off the scale. Percussive bliss.

In terms of mellifluous guitar, there simply isn't anyone that hits the intersecting vein between Tom Verlaine and the racket we must attribute to Lou Reed and Sterling Morrison like Dean Wareham. The program is curated brilliantly and it requires the same of the location it plays at. This isn't something that'll be trucking around exhibition centres anytime soon. I'll keep you up to speed to when it might be coming somewhere near you. "13 Most" needs to be seen and heard. Evan Henderson's leap of faith was entirely vindicated and in the process, nobody who was there will ever forget it. Check here to see if they're heading in your direction.

In years to come, people will claim to have witnessed this. Anybody who dares to criticise any aspect of how cool it was is either jealous that they didn't do it or just a plain old trumpet. No disrespect to the instrument intended.

Were you there? It would be great if you could maybe leave a comment here to thank everybody in the band and the venue for creating something entirely out of kilter with the nature of what the common or garden concert experience has become. I appreciate the fact that a couple of you folks have already applied those to the previous post

I don't know about "arts" but to paraphrase The Killer, that's Jerry Lee incase you figured I meant that Brandon Flowers or one of his cohorts, but I KNOW what I like.

Some photos, link courtesy of Murray.

Should be a report coming from A Head Full of Wishes very soon.