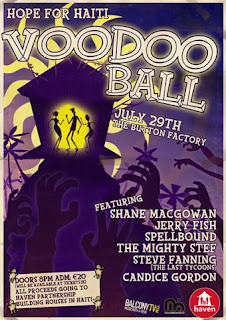 Voodoo Ball tickets!
Posted by Lindsay Hutton at 10:21 AM No comments:

The A-Bones and The Riverdales new albums are released today and it's Bastille Day where Brother Patrick resides... unlikely I'll be back posting here prior to the show later. look forward to hearing both of those though! Got some e-mail and other stuff to partake of. Catch you on that flipside. End of message.
Posted by Lindsay Hutton at 8:25 AM 6 comments:

PDFs
of all print issues can be accessed below. The 3 page pilot, “0” from September 1976 (Eddie and the Hot Rods drawing on the cover) never survived (at least I don't have one). There were only 10 as I recall.
Rockin’ Bones is also here. 1 - 7 are the newsletter/zines from before the club was closed down. I tried to keep things going and opened it up to the emerging garage/rock n' roll explosion with No. 8 included The Nomads and Scientists. I didn't care to encourage the goth/psychobilly circus and it fizzled out after 12 issues. The LOTC was about the fans and the club's short lifespan (1980 - 1983) generated a lifetime of good faith.
Source material quality wasn't always good and not having access to an A3 scanner anymore didn't help. Much of the early NBT content is embarrassing (to me) but all part of the journey. I started a tip sheet in 2020 but no longer have suitable PDF privileges so that was nipped in the bud for now.
Numero 1
Numero 2
Numero 3
Numero 4
Numero 5
KNBT is an occasional attempt at rounding up a bunch of songs that might accompany whatever you're up to.
KNBT Episode 1
KNBT Episode 2
KNBT Episode 3
KNBT Episode 4
KNBT Episode 5
KNBT Episode 6
KNBT Episode 7
KNBT Episode 8
El Sotano Shows - RTVE3
January 2016
December 2017
Rock Writ Blether with Armen Svadjian
Rock Writ Gab
Muchas gracias to Simon Birrell for his assistance and patience with getting all this on here.
e-mail: lhnbt(at)hotmail(dot)com