THE WEEK BEFORE THE WORLD FELL DOWN – MADRID OCT./NOV 2016

The world fell down after I returned from Spain.

Idiocracy turned out to have been a documentary sent from the future and folks that we could really do with still having around have passed on.

I’ll take up this epistle where I left off. Leaving Benidorm for Madrid after another rip-roaring FUNTASTIC. It was full on Hallowe’en when we hit town, the streets were rammed. I made it to base camp and took a wee while to regroup before heading to Madklyn where them Young Fresh Fellows were DJing at this excellent Madtoon haunt. It went well. From there I introduced mi crew to the wonders of WEIRDO BAR! where Pantero Rosso was laying down a mighty selection of shouty punk rock to which Kurt and I took great pleasure in screaming along with.

Ther great crowd in there was equally up for the craic. When the lights came on there was only one destination that could follow this. Can you guess where that might have been? Wurlitzer is where. The place was jumping because November 1st was a holiday. Monday night/Tuesday morning was for all intent and purpose a full blown Saturday. The Dictators “Weekend” come to life on steroids.

Scott (McCaughey) and I left Wurli at 5.35am. On my way to the hotel, I had pizza for breakfast. Or was it supper? No coca cola though.

It was a real honour to be asked back to El Sotano, Diego and Francisco really make it fun. November 1st - being a holiday - was relatively sedate. That lull is perhaps what brought upon the lurghi but after 5 days with about 5 hours (maybe 8 tops) sleep then perhaps I was getting what I deserved, getting further away from being a youngster with every passing day. I’m reminded of that song by Spirit, “Nature’s Way”...

Next day, the YFF van headed for Valencia. Some of us stayed put to just dig being in Madrid. The early night meant I was up bright and early to meet Ulla and Murky for breakfast. One great thing did happen though, Tad’s cymbal device was located and I was able to deliver it before the band set off. That was the last sign that I recall of thinking that there could be a god or something akin. Before the fucker started acting up and picking off good people for no apparent reason. The talisman had been returned though and that made me feel like I'd achieved something worthwhile.

Lisa and I met Mr Marco Padin, he of the Ghost Highway imprint for a slap up Italian lunch at La Tagliatella out near where he works near the Suentes train stop.  This man does great work. In the evening we did a wee tapas crawl with Murky and Eva. Some time out just to talk and sup.

November 3rd was Ruthie’s birthday and the festivities took place over cocktails and the YFF show at El Sol. That was quite a combo to have play your birthday party young lady! They even played “Gear Summer” in which said wee lassie makes a cameo appearance! Ms Varla Rose made the Sol scene too.

So all of a sudden it’s Friday. And The Dahlmanns headed to town with first-timer Jo Espen Johansen. Lisafer wired into “sea varmints” (c) LF - with them at the food hall while I stood back and watched. What I recall of it because I was in a haze of booze and pharmacy drugs was a blast! At one point my head totally cleared when I was in Wurlitzer with Jo and Andre. Line sensibly opted to sleep by that point. That place has healing powers and just as well because my Madrid electricity was on the futz and then some.

La Fiambrera’s SHAG exhibit came to a close that Saturday. These gals have really done an amazing job getting to the level they’re at now, just a month shy of being open for 2 years. Having a bunch of my favourite people on earth join me in the greatest city on earth was a trip. Of course others were missed but next year I hope the whole gang can make it provided I make it to the 6 decade mark. And even if I don’t then the party can still go ahead.

Casa Camacho is virtually next door to my favourite pastry emporium and it is the home of the "yayo" (a tasty aperitif that consists of gin, vermú and casera). Ms Ulla and Captain Lagarto made a great choice by picking this place and if you ever get out there you need to try one or several of those. The lurghi kind of had me on the ropes but there was one more night to go with the gang and I wasn’t about to wimp out. I wasn’t firing on all cylinders but at one point in Wurlitzer, I swear that my napper totally cleared. I don’t recall what was playing or what the intake between the pharmacy drugs and booze was but I really should have been paying attention rather than just attempting to stay vertical. 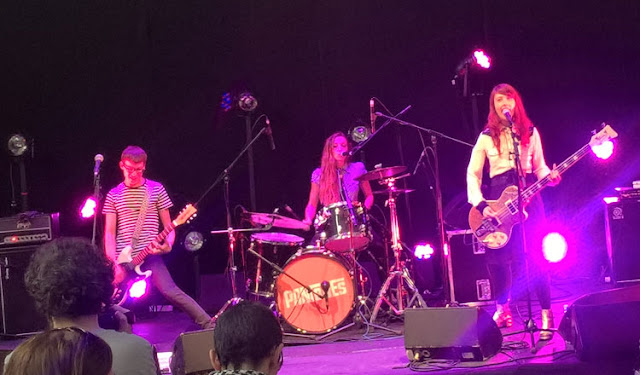 So maybe it wasn’t a blaze of glory but I think we did pretty well. The upside of not being completely wasted was that it was really just a tiredness/cold combo I had to deal with on the Sunday morning. Folks were beginning to leave town and the curtain was on its way down. I left the kids in Iowa (the cafe) to make a bee line to see Pantones play a kids show at La Casa Encendida, a very nice culture centre downtown that reminded me of the CCA in Glasgow.

It was so good to finally see them play. What it had to lack in volume was more than made up for by seeing the rapport their music has with children of all aged, parents and kids alike. They seemed like good role models as they let the youngsters loose with their instruments after the set. The drone/proto-free jazz noise emanating from the stage sounded like something a WIRE reader would piddle themselves over. Meanwhile, there's a brand new album coming on Subterfuge. Sooner rather than later I hope.

Every one of the wee attendees will one day start or be in a band. I’m sure of it.
Are there such events as these here in the UK? Health and safety would likely have a field day and make it virtually impossible to stage. The Spanish people are very savvy and seem to be blessed with a crazy strain of common sense when it comes to family.

There was a children’s rock’n’roll show at Wurli that morning too with Las Señoritas Estrechas and Calvario. Stepping back in there in daytime was a little psychedelic. Menudofest is a regular occurrence where the kids get to chalk on the walls and let off some steam in this very cool environment. Even if it’s a plot to indoctrinate them for later life then it’s a win/win. They’ll associate it with a good time. It's the “baby” of Marta, a punk rock Snow White that I met in Benidorm with her friends in conjunction with Wurlitzer. The staff in this joint are real troopers in every respect of that word.

This almost brings me back to where we started. I was really starting to fade but got my second wind when I was able to see Sonia briefly and to meet her son Lux! He’s already beginning to act like his namesake. Jim and Kurt came by having gotten back from Bilbao and that – as they say – til next time - was that.

As I wandered back to get my bags and a cab to the airport, I just wanted to get on the ride again but I was about to pay the price of having such a good time. My thanks to everyone that chipped in and turned up to make my 59th year on this fucked up world a special thing. The Fellows adding "NBT" (based on The Screaming Dizbusters version)  to their set in Benidorm and Madrid and a call from MRC on were the icing on the cake.

If I forgot something then that equates to me having an even better time than I think than I recall. How far can too far go?