I found myself doing the facebook "networked blog" thing yesterday for some reason. Apparently I can "invite" 20 folks at a time to join but I know what a pain in the ass these "become a fan" messages are. Rather than add to any fb stress, I figured that I'd mention it here - like I did on fizzbang yesterday - and if you want to get on board then you can.

I won't be canvassing hard and sending message after message attempting to wear you down. There are people out there that do that. You'd think that after attempt #10 that they'd get with the program. But no.

Posted by Lindsay Hutton at 4:26 PM No comments: 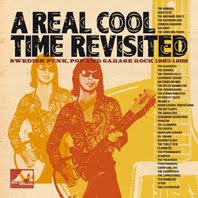 I guess it was sometime around 1982 when I got to be aware of the emerging Scandinavian penchant for garage rock. It took a side road off the punk highway and created a strain which matched Australia for passion and authenticity. Often it would pick up on additional influences and styles that would set it aside from just being reconstructed or merely authentic. The people who played this music weren’t throwbacks or wannabe “cave teens”. These kids had a taste for the hard stuff and they played it fast, loud and loose but never necessarily in that order.

This anthology maps the nascent genealogy well and kicks off with The Nomads version of “I’m Five Years Ahead Of My Time”. They were the pathfinders who kicked the stable door open. The cut of their jib was evident seeing as to how their first release was two songs by a combo by the name of The Sonics. Rock’n’roll archaeologist Four-Eyed Thomas resurrected ancient knowledge long considered lost and in putting this project together has brought the cycle back full circle. There have been several generations of solid Swedish sounds and somehow, this is the logical “rattle and roll” follow up to “Searching For Shakes”. A 2-disc (or bundled download) selection of choice cuts that might inspire or just plain re-ignite your faith in what a good old racket (as in noise) is capable of. It makes me think of our departed pal, Lennart.

It hardly seems possible that much of this stuff is more than a quarter century old. It was The Cramps and Panther Burns that unlocked the possibilities and lit the fire. Nuggets, the Pebbles and Back from the Grave series and other comps recycled relics from the past and this continues that legacy. "A Real Cool Time Revisited" documents a juncture when there were no borders. These bands stormed the battlements and their music reverberated around the world.

Sweden has always boasted a far and away more fertile scene that that perpetrated here by the like of Creation. The jangle and twang never came over as studied. You could never stage-manage a force of nature like The Stomachmouths. The Backdoor Men and The Crimson Shadows displayed a fervour that was like Bomp magazine come to life. The Sonic Walthers “No Lies” is like the Hoodoo Gurus channelling Slade. Remember, all of this was happening when the UK was lapping up shite like Bauhaus. “When I Get Home” by The Hijackers is simply one of the great 7” singles by anyone from anyplace. If you haven’t had the pleasure then it’s right here. And they were real teenagers too.

Union Carbide Productions was another combo that wasn’t afraid fly their Stooge flag even when Iggy didn’t. They sounded dangerous then and they could still eat and spit out The Jim Jones Revue who are more or less peddling a much lesser ramalama. The BottleUps gave us the one and only Robert Johnson whose surf and destroy guitar action continues to light up the galaxy. He’s using technology to mutate the form these days but I think his battleplan is pretty much on track. The world will catch up with him one of these days, like they never did with Problem, a big RJ influence. Thinking Wray as opposed to Dale.

"Carry On" by The Public Vein on Garageland Records (from Umeå) always reminded me of Scotlands own Primevals and how they translated The Gun Club’s off kilter blues. Sator’s “Pigvalley Beach (remix)” is The Ramones vs Sigue Sigue Sputnik on a deserted landet wasteland. The Leather Nun’s “Primemover” is no relation to that of Zodiac Mindwarp but it does predate Marilyn Manson by a good many years. I recognise that “can you feel it?” mantra. Ha ha.

So I could spoil the whole enchilada by jabbering on but you’ve seen the tracklist. It was a very male domain back then. I think that the only girl involved is Anna Nystrom who was in The Stomachmouths? Or was there a gal in The Pushtwangers? I don’t recall. Please feel free to correct me or add info in the comments section. This twofer offers a bloody fine ride back in time and it never ever sounds backdated in that “what was I thinking?" sense you get when you tackle “Sandanista”.

Måns, Johnny, L-P and Mr 4-ET himself did a bang up job in assembling this time capsule.

All that remains to be said is that Debaser in Stockholm is the place to be when this will all take human form for an all star revue Real Cool Night Revisited on March 5th 2010.

See you in church.
Posted by Lindsay Hutton at 4:00 PM 4 comments: