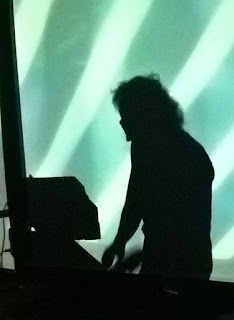 Wandering up Sauchiehall Street last night, it seemed that the exceptionally dark night colluded with the dreich and damp. The LED street lighting did little to quell the foreboding. I just thought about a similar trek in Madrid and how it never feels like. "Go and live there then you twonk" (other expressions are available but this is a family show), I hear flashing across your mind. You know, I think I just might but that's a consideration for another day.

A friend commented on the Martin Rev show last night reckoning Rev was "a bit of a chancer". I didn’t take that as a negative because while I understood exactly what he meant, I thought the “show” worked. It’s about being able to convince those that are watching, listening is secondary. Glasgow loves Rev and the city always loved Suicide. They were accepted there very early on. 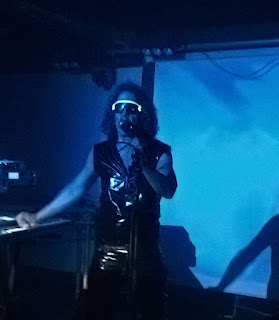 Things ran a little late and by the time he swaggered on, we’d been assaulted by various degrees of noise via the opening “bands” and Twitch’s disc jockeying. It was nice to hear Wall Of Voodoo again.

Marty’s performance is always entertaining. The volume that he uses to punctuate the approximations of the material is sometimes verges on painful but that’s part of the experience. I don’t wear earplugs but I respect the right of others to do so. However, in this environment it’s shutting out part of the fun. If you go to see nobel prize winner Bobby D these days, you don’t get by numbers retreads of his songs. The Rev/Suicide “songbook” gets the same treatment.

During “I Surrender”. I thought he mentioned Alan but I may have imagined it. The bittersweet aspect to all this is that I really miss his sparring partner. Not sure what the title of the second piece is. The one that sounds like a demented loop of “Let’s Dance” by Chris Montez. Or The Ramones if you prefer.


A loosely recognisable groove blew out of the squall every now and again but that was almost secondary. Welcome to extreme show business, I wonder how this might work in Vegas because this is entertainment. Pure but maybe not so simple.

A disco-fied edge informed much of the material played up to where I had to leave to catch the (Love) Train. Another loop of The Trammps “Disco Inferno” threatened to engulf the fateful in a perpetual tailspin to Hades. Martin Rev will turn 69 in a little over a week. He’s still out there.

Thank fuck that he is.
Posted by Lindsay Hutton at 6:26 AM 1 comment:

SHE TORE WE DOWN!

In the town name-checked in “Do You Remember That” where the pub that (nearly) everyone said she should stay away from her ‘winnebago driver’, Amy Rigby returned to kick off the series of UK shows. Glasgow’s Admiral Bar resonated to a set that drew upon an incredible canon of songs that have appeared since the advent of “Diary of a Mod Housewife”. Her debut album was only ever available on CD until now and she’s here now pushing copies of the vinyl. It’s my theory that the people who could really benefit most from hearing this gal are those who have no idea that she even exists.

Aye. I consider this lady to be family but I’m an objective sonuvabitch when push comes to shove and some of these songs have been known to move me to tears. I have many memories wrapped up in these songs and I was actually present at a couple of the ‘scenes’ logged in the aforementioned “Do You...”. Something I don't take lightly.

But I ain’t here to sell you a pup on behalf of a pal. I genuinely believe that it’s a crime to have someone of this calibre playing the venues that you’ll find her in during this trip when way lesser individuals are playing bigger places. I don’t ask for much of this world but it’s time that people made a connection with the good and the true again. It’s always a thrill to watch someone who’s never heard Amy just totally get it. Like someone who’s maybe never seen “It’s A Wonderful Life” before, I envy that metaphorical punch in the face.

There were shout-outs to our dear-departed, Billy Miller and Stewart Cruickshank during the show. I’m pretty sure that the disintegration of “Dancing With Joey Ramone” was down to Krunch himself, making himself known to us in the ether. T'was utter magic nonetheless while a crazed “Twenty Questions” conjured up Hasil Adkins. Amy can raise quite the ruckus when she wants to while “Don’t Ever Change” is one of the most gentle hymns to these times that you’ll ever hear. I'll never forget hearing that for the first time in the studio of BBC Scotland in Aberdeen back in 2001 and it hasn't lost it's potency one iota.

Having Eric along on to add bass and guitar here and there was a treat. And there were new songs too that will be coming up in 2017 on her next album. To quote one of the songs that was performed on Thursday night, “Don’t make the fatal error that you’ll find someone better, ‘cause you won’t.”

You truly will not.
Posted by Lindsay Hutton at 9:23 PM No comments:
Newer Posts Older Posts Home
Subscribe to: Posts (Atom)