After Iggy caused some damage to a Dutch TV studio miming to Lust For Life (#3 over here in november 1977), the Dutch press turned up en masse when he returned to mime to I Got A Right. Too bad for them, Iggy refused (even after mucho pleading) to damage anything at all (he's good at posin' tho'..)
Posted by Jeroen Vedder at 11:59 PM 2 comments:

TEENAGE FANCLUB perform Bandwagonesque Certainly one of the best bands to come out of Glasgow, always seem to be around when you need them! And this time it’s to remind us of their 1991 album Bandwagonesque which, you may have forgotten, was voted the Best Album of 1991 by America’s Spin magazine beating Nirvana’s Nevermind and REM’s, Out Of Time. A travesty? Tickets on sale Saturday 5th August @ 9am.Glasgow, Barrowland - Friday 29th September. (Info from Gigs In Scotland.)
Posted by Lindsay Hutton at 6:16 AM 1 comment:

Thanks to Ben for the tip-off.

Posted by Lindsay Hutton at 6:11 AM No comments: 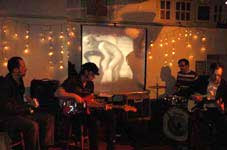