Sure I take requests; playlists, top 10s, whatever. You tell me...
Here goes:

Sods - Minutes To Go (1979, Step Forward LP).
Pulled this one from the shelves earlier today, fantastic p-rock from Denmark. The William Burroughs reference and Suicide cover make it clear these kids were in the know.

Various - Studio One Lovers (2005, Soul Jazz 2LP).
Fab collection of early reggae and rocksteady tunes. The Sharks' How Could I Live is easily worth the price of admission by itself. But dig the Mad Lads' Ten To One and the Wailers' ultra rare I'm Still Waiting as well. Beautiful vocal harmonies, and more proof that the Impressions were bigger than the Beatles in Jamaica..

Dictators - Viva Dictators (2005, Escapi CD).
As much as I obviously enjoy this one, it would have been so much better if there was at least one new tune aboard and they'd left in HDM's between song rants. Each song here is a classic of mythical proportions, sure, but Manitoba's anouncements are such an intregal part of the 'tators'live experience. If you wanna save rock 'n' roll, you gotta serve the entire ensalada, not just parts of it.
Posted by Jeroen Vedder at 10:37 PM No comments:
New York Dolls recording new album.
Posted by Jeroen Vedder at 6:03 PM No comments:

Lookin' PRETTY good... (thanks Martin!)
Posted by Lindsay Hutton at 3:33 PM No comments: 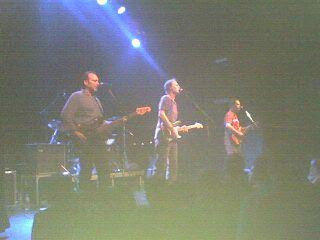 OLD FARTS AT PLAY: TELEVISION LIVE IN UTRECHT 15/07/2005.
It's close to three decades since Tom Verlaine graced the cover of the very first issue of NBT. But even so many years down the line, Television proved they can still present a clear, transparent image/sound that is remarkably free of outside or current influences. Recent material sounded fine enough, but hey, gimme Marquee Moon any day. I can sorta understand that new songs probably give some kinda validation to the band, but it's the strength of the original material that still pulls in the crowds. And really, there's nothing wrong with that, as long as it's done with the kind of dignity as displayed tonight. See no Evil, Venus, Friction, Marquee Moon and Prove It (tho'sadly no Little Johnny Jewel) were all performed in fine style with the amazing guitar interplay between Richard Lloyd and Verlaine as good as it ever was. This reuion biz can be rather tricky at times, but this TV set was built to last and will never need fancy extras to make an impact...
Posted by Jeroen Vedder at 1:30 PM No comments:
HIGHTONE have just released 4 albums that were recorded at The Studio in Springfield, Missouri by the great Lou Whitney. The Show Me state is still raising the bar when it comes to pumping out simple, life-affirming, rockin’ country blues and beyond.

The Morells – Think About It

What can I tell ya about The Morells? They should be a staple of each and every NBT visitors sonic diet. They’ve made three albums in 20+ years because they believe in quality not quantity. The Reverend Joe of Terry isn’t involved this time but Dudley Brown is a fine replacement. THINK ABOUT IT! is an 11 song masterpiece enveloping the vast spectrum that these guys curate into THE roots rock sound to beat all others.

Kicking off with a unique sinewy, slip, sliding romp complete with kazoo solo through Chuck Berry’s "Nadine", it’s a great feeling just to know that they’re active. Other cool covers here are Paul Revere and The Raiders “Ups and Downs” and The Delmore Brothers “Girls Don’t Worry My Mind”. Rubbing shoulders with equally groovy originals like Donnie’s “She’s Gone” (“and now my heart’s just a pile of masticated protein” indeed and “Cool Summer” which tips a keyboard nod toward Bananarama’s "Cruel Summer"). Rongo and Lou keep it all swingin’ as only they can.

All in all, forget what you’ve been told is the sound of this summer. This’ll see you through that and provide natural daylight all that remains of this annum and far beyond. I hope they can make it over this way because right now, I can’t afford to go to them. I would if I could. It’s 15 years since I made my pilgrimage to Springfield and methinks it’s time to be planning another.

Brian Capps used to be in The Domino Kings but these days he plays out with The True Liars. The TL’s include Skele-fellas past and present including Sir Bobby Lloyd Hicks and The Rt. Hon. Kelly Brown. Capps has made an album that sounds like Dave Edmunds recording in Bakersfield.

A rollocking, gospel tinged pot of primo rockin’ country that I do believe might make inroads to taking that Springfied sound a little further afield. The album contains mostly Capps originals but also includes a couple of merle Travis covers and a version of Rodney Crowell’s “Standing On A Rock”. The title track includes one of those patented heart-shredding Donnie Thompson solos. This is perhaps more mainstream than The Morells, but whatever trajectory it takes to put this ensemble on the map is something I’m down with.

The Bel Airs – Got Love

These guys are a kinda stripped down Midwest spawned Blasters that consists of David and Dick Pruitt along with onetime Paladin Mike Cherry. The sound is fleshed out with the spooner Oldham type keyboard stylings of the aforementioned Rev. Joe of Terry. Anything that this guy is involved with comes five star certified by me.
It’s a simple but effective strut down the bluesier, bruisier strip of that bar room hardy annual sound. American music – undiluted and undisputed.

Fellow ex-Slewfooters with The Morells, The DK’s sound a little like The Mavericks channelling Bobby Fuller on the title track. No bad thing in my book. Indeed these guys could appeal directly to the vast legion of fans that Raul Malo’s crew have built up over the years.

This is a pretty simple but effective style of country rock which probably stand the best chance of infiltrating the airwaves. Familiar enough to set the foot tapping but not to breed contempt. Not a bad strategy. Standouts are “Dark Side of The Moon”(don’t worry, it’s not a PF cover) and the title song. “Lying Next To Me” is like a great lost Del Lords song. What the hell could be bad about that.

The recording capital of Greene County is still churning them out, hoping that the world might catch up one day. It’s not about to be the new “Seattle” or anything like that but there’s a confidence in that community that will continue to buzz unabated while continually vapid trends come and go.

Update at 3.49pm: Some Big Noise from Springfield tour info! (Thanks Steve...)
Posted by Lindsay Hutton at 10:46 AM No comments:

BOONARAAA action over the next three weekends, starting today!

July 30 Oberhausen - Druckluft - Garage Craze / Germany + The Satelliters
Posted by Lindsay Hutton at 7:38 AM No comments: 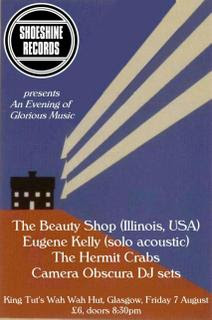 The Beauty Shop - dark acoustic country noir rock with a twinkle in its eye, all the way from Illinois.

Eugene Kelly (solo acoustic) - what can you say about Mr. Vaseline that hasn't been said before?

Should be fun fun fun..........
Posted by Lindsay Hutton at 7:26 AM No comments:
Newer Posts Older Posts Home
Subscribe to: Posts (Atom)