The Sonics "Way Out West" set from Gothenburg will be aired on Sweden's P3 Live this coming Monday (13th).

(Thanks to Kjell for the nod on this one)
Posted by Lindsay Hutton at 5:30 PM No comments:
It is with some relief that I can report that - I DON'T HAVE TO GO TO THE SALT MINES UNTIL ONE WEEK FRAE MONDAY! Don't like shouting in cap's like that but that was me getting carried away for a second. I haven't had one entire week off where I had next to nothing planned in a long, long time. Will I use this relative freedom wisely? Quite probably not, but you never know.

The "hotmail" wasn't working earlier but it seems to be now. Intermittent problems with all things internet seem to be ongoing. It doesn't matter really, other than if anybody thinks I'm not getting back to 'em. It's not necessarily my fault. Much as I try to keep on top of these things, maybe I have been a little tardy of late in some aspects of communication. At the same time, this caper with having to be reachable at any given second is not something that fills me with any great joy. Anyways, first things first.

A most excellent Eastertime to all our visitors wherever you happen to be dropping in from. Expect further bulletins in due course.
Posted by Lindsay Hutton at 1:39 PM 1 comment: 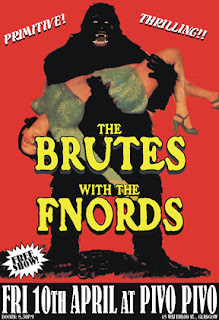 It ain't GF around here until approx. 12.30 but the wind-down is on, Mr Spence has managed to get this show back on the rails at the eleventh plus hour... have a braw Easter weekend, whatev you're getting up to.

THE BRUTES
THE FNORDS

The first Glasgow show of the year for THE BRUTES, with support from multi-gender garage surf punkers, THE FNORDS.