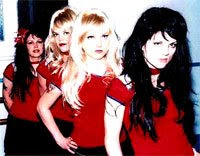 THE PRISCILLAS
These girls graduated with honours from the Rock’n’Roll High School (old boys including The Ramones, of course) and then spent a salubrious term at the Academy of Tragic Melodies (the Shangri-Las‚ finishing school, in case you didn't know). Looking like they’ve just stepped out of a Russ Meyer movie, these four girls with big boots, big hair and very small skirts rip through a handful of punk charged sixties go go groovers, delivering a mix of punk and garage rock with pop hooks and attitude a plenty. This is fun with a capital "F". Their last gig of the year so don’t miss it!

THE CHOKE
Despite being been formed for a mere five months, they are already the hottest band in New York. Coming across sounding like sixties girl groups and Motown, filtered through the attack of garage rock and anthemic punk'n'roll they've got the songs and the attitude to take on the world. Catch 'em early before the real hype starts as they take on England this November.

SPOOKEY
Yes! Another all girl combo! From Japan! These teenaged garage pop rockers hail from Hamamatsu and have been described as The Shangri-Las meet the Ramones with a healthy dash of the Clash (and, it goes without saying, truckloads of cuteness!). Formed in 2002, they came to the UK for the first time last year after a British group on tour saw them and persuaded them that they had to come over here. On that first visit they toured with the Priscillas and became firm friends. So who better for them to play with this time around?! On their more recent visit earlier this year they toured with the Briefs and won over a legion of new fans, including Captain Sensible (who invited them to support the Damned on their Japanese dates later in the year). This gig coincides with the release of their debut album on Killer Records. www.spookey69.com

THE RANDOM HEROES
Formed in 2002, the Heroes mix the melody and song writing of Screeching Weasel and The Queers with the speed of late period Ramones. After spending a year or so playing locally, honing their set, they released their debut EP, "Bigger Than Jeebus", and then toured throughout the UK. Their debut album is out in the summer of 2005 on Killer Records.
Posted by Lindsay Hutton at 9:03 PM No comments:
Newer Posts Older Posts Home
Subscribe to: Posts (Atom)