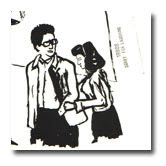 A limited 45 (500 copies only in fetching clear vinyl) by 1990s and The Royal We paying tribute to Postcard Records is available now from Monorail Music and Hitherto in Glasgow. It's all DIY-mungous and comes in a hand folded, screened wrap. No two the same. Struck to mark the Six Cities event, it's £4.99 (plus postage) a pop from

You can see the process at the events section of the Hitherto site.

Also, coming up in Edinburgh during the Festival in August... Hamell on Trial and the David Lynch Documentary

More about those later though, there are chores to be completed and the flesh is weak.
Posted by Lindsay Hutton at 9:47 PM No comments:
Newer Posts Older Posts Home
Subscribe to: Posts (Atom)