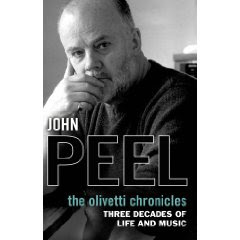 Crisis? Well, if you ask me, the only way to keep things afloat is to spend, spend, spend.

The Olivetti Chronicals rounds up a truckload of material as written by John Peel over the years for various magazines. Suffice to say it's a mandatory purchase, as Peel's way with words wasn't confined to radio only. In print he was equally informed and funny. And my only complaint about this book is that it doesn't include all of his writings...

Coincidence or no, but while reading this book I was listening to a new Undertones 2CD compilation. And before you shrug your shoulders in a "What's new?" gesture, lemme explain that while disc 1 features the familiar, but still stellar stuff we all know and love; disc 2 is all previously unreleased demo and live goodies that 'll make you wet your pants... The crude, crude demo of "I Don't Wanna See You Again" alone, will keep me happy for weeks to come! Fantabulous liner notes by Michael Bradley add up to another must have...

Finally, there's the deluxe editions of the first three Buzzcocks albums... I know Lindsay doesn't rate 'em, but what the heck. I sure like this stuff. Offered with a massive amount of previously unreleased wares, these are the final word on this subject. Liners by Jon Savage, what more could you want?
Posted by Jeroen Vedder at 11:35 PM No comments: 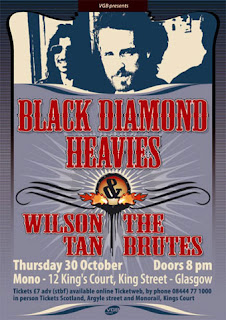 Black Diamond Heavies, Wilson Tan and The Brutes @ Mono this coming Thursday...
Posted by Lindsay Hutton at 5:28 PM No comments:
I had an odd dream last night (and I seldom dream). Can't remember too much about it but it involved going to see The Cramps and they'd gone all old school Bollywood. Lux and Ivy plus a sitar player and less than conventional percussion set up. Very cool as my vague recollection serves. Anyway, that was soon flushed away by the daily deluge of "you're fucked" messages.

Turn on the radio the subtext is doom. Look at the news and gloom abounds. By the time I get out the door, I wonder if it's worth the effort being very much entrenched in the half empty camp in the first instance as you know. Actually, the overriding message is that we're all fucked, that's the royal we - you, me and everybody so we might as well get used to it. What? You are? Good. Latest is that its maybe a good idea to go and take a big loan out to spend your way out of the downward trajectory. I like the sound of that but reckonn that the bank won't wear it.

They can't take our spiritual wealth away from us though can they? Maybe not but they'll have a damn good shot at it. As the Obama hype plays out in the US, all the positivism, all the good vibes, all the hope might just get humped when the cheats start to work the room. Not outwith the bounds of possibility now, is it?

All very sobering for the day after the clocks went back. By the time they go forward again, the world will be an altogether different place. Maybes.

Now that winter is here, visitor numbers seem to be up again. Always a good thing to see that people are dropping by and hopefully being directed toward stuff that'll hit the spot. And more often than not, you don't even have to leave the house. Gig thumbs up for we shut-ins.

The more time I spend in front of a computer for work, the less likely I'll come home and rattle up another couple of hours. This is becoming something of an issue with keeping this thing as fresh as I'd like it to be but we'll see how that particular cookie crumbles. It's not as if I have an actual life to be getting in about although there is the odd moment.

People have asked why I don't have mp3's available for download or why isn't there a "player" on the blog. Essentially because I don't have the time and furthermore, I prefer to direct folks to either the artists website or to places that do that kind of thing way better than I would or could.