Brother Joss talkin' to the man, thanks to Nick for the link)
Posted by Lindsay Hutton at 7:31 PM 1 comment: 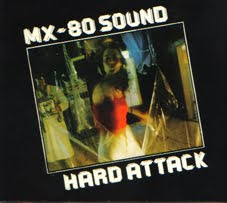 You might have heard the term math-rock bandied about, well if such a strain doth exist then MX-80 Sound are presumably in the quantum or advanced nuclear physics rock bracket. That’s not to say that their racket isn’t accessible to the lower strata. No sir. No ma’am. Their frequencies can be enjoyed irrespective of your IQ but the way these sounds tweak your subconscious could perceivably leave you scarred. This stuff is so smart that it undertakes procedures on the listener that no other act in the history of rock music has ever hinted at. Their instruments haven’t been sterilised but they’ll cut you clean and sew you back up before you can say “Myonga Von Bontee”.

This CD-R is available from the band’s website and contains the “Big Hits” EP and “Hard Attack” plus the additional outtake “Sad Girls”. This music swept into my existence over three decades ago and it’s making no allusions to leave. I wish you could see then live. If these guys were playing Wembley in a specially constructed stage then I’d consider the world to be a much better place. And why the fuck weren’t MX featured in all this 50 years of Island Records malarkey? Because they were at least 50 light years more sophisticated than Robert Palmer? Not a bad observation sport.

You can also score a copy of the "15 Laffs" 7” that came with Forced Exposure several light years ago. One of my most prized 45’s of all time. And the Bruce Anderson CD is now available from CD Baby and perhaps Volcanic Tongue too. 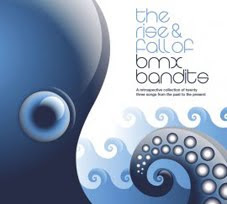 The Rise and Fall of BMX Bandits is a deluxe collection in a damned elegant digipack courtesy of that excellent Madrid imprint, Elefant. This retrospective was compiled by Duglas himself to represent the journey from 1986 until, well right now. It includes a lot of stuff that’s been unavailable for some considerable time and other gear that’s been unearthed for the first time. Kicking off with “E102” from their 53rd & 3rd debut 45, that cut in particular has aged well. I wasn’t convinced at all back then and thought it was a bit “mock rock” like Bob Harris considered the Dolls. Still, I realised that I was wrong and a finer distillation of pop music through the times very probably doesn’t exist.

Could “Your Class” really have sounded this ethereal in 1989? It really shimmers here, the mastering is beautiful. Surely it would have been all over the Top 10? And that version of “Baby Loves Lovin’”, that one’s worthy of Springfield, Mo’s finest. So no downloads folks, this is a tactile bijou package that includes the great, long gone Emma’s House “Whirlpool” and even their Northern Soul stomper take on Tom Waits “I Don’t Wanna Grow Up” that The Ramones kicked into touch some time before old T became the big deal he’s become. The version of Galaxie 500's “Tugboat” with Angel Corpus Christi is on here too.

Folks around Glasgow are urged to make a note in their diaries that the band will be playing the best-looking venue in town, The Classic Grand on September 12th. 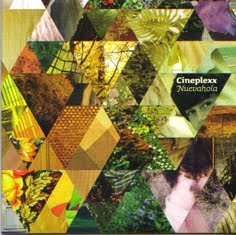 So keeping this kind of interrelated thread going for a bit longer, Cineplexx has just had a compilation issued here by Cherry Red. Sebastián Litmanovitch’s “Nuevahola” is a series of soundscapes that spans 1997 to the present. Born in Argentina but based in the fine city of Barcelona, the music on here includes contributions by Duglas and Stuart Bandit and also Norman Fanclub. There’s a definite Glasgow connection with the sound which is a spacious, filmic affair that goes from lush and sweeping to fragile and introspective via all the aspects of 60’s and 70’s pop.

It sounds like it would have been very much at home in the stable of el records, Mike Alway’s label from way back whenever that Cherry Red distributed. The name Cineplexx is odds with the connotations such a word has here in the UK. In many ways the project should be called GFT or Filmhouse. No Cameo I’m afraid, that’s already been sullied by those codpiece toting individuals. This is a classy verging on arthouse prospect. No mega buckets of popcorn or chemically-enhanced cheese in the mix here. Don’t believe the stats that say organic isn’t good for you, it certainly is where music’s concerned. “Nuevahola" also includes a dust bowl, weather-beaten version of “Paint it Black” the like of which you’ll never have heard before.

A nice introduction to a guy with a cool line in alternative treatments using acoustic guitars, synthesisers and pretty much anything else he can get his mitts on.
Posted by Lindsay Hutton at 5:25 PM 4 comments: 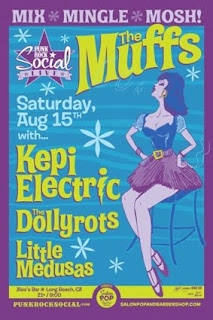 Posted by Lindsay Hutton at 3:05 PM No comments: 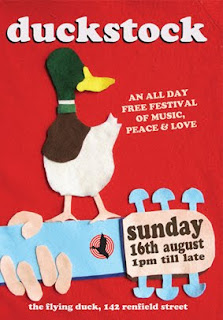 Better a tad late than never I suppose. Just realised that I hadn't mentioned that The Primevals are playing in Wishaw (pronounced Wishy) today. I hope the weather is a little less inclement thereabouts. Thanks to Paul for the heads up.

Tomorrow they'll be at Duckstock in Glasgow and will be onstage at 4.45pm - ish. Full details here.

I need to be gathering my thoughts and what have yer to bring this thing up to speed over the next day or so. Lot of "localised flooding" around these parts so bloocks to that for a game of soldiers. Did think about going into our local town centre to see a combo that I've heard were half-decent but I imagine that's likely to have been cancelled. Still, if there's a lull in the monsoon then maybe your scribe will brave the elements. Not very likely but there's always the possibility that I'll discover something on the "bunker supplies" front to be deficient.