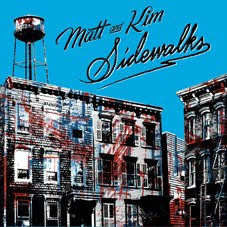 Matt and Kim’s “Sidewalks” drops on Tuesday (2nd) and reading some reviews of the album really underlines what is redundant about music writing. This isn’t something that requires the slightest bit of chin-stroking. You’re either with it or you’re not and the double whammy of “Block After Block” and “AM/FM Sound” encapsulate totally what to my mind sounds like some seriously infectious frequencies. Matt has admitted publically that he and Kim don’t write songs anymore, they make anthems.

I admit, when I hear some twonk say “I know where you’re coming from” in a conversation then my hackles go up. It can mostly be translated as “fuck your opinion” but in the case of the song, in the hands of these kids – it's sincere. They mean it. It’s all about how the message is delivered and what some pockets of dissent can’t seem to handle is the unity and sheer positivism that these two exude. It’s practically evangelical. I don’t mind if you’re sceptical but if you experience one of their rallies then you’ll get it. No question.

Some regulars think that I’ve lost my mind. There’s no point in labouring the main ingredient that sets them apart. It’s a chemistry thing. The two of them and an audience makes for an explosive combo. It makes you realise that maybe having a stupid, good time isn’t such a bad thing and this Village Voice review pretty much nails it.

Just like you can’t deny that those Lady GaGa singles are well made, or that “Oops I Did It Again” is better than anything Pavement ever did. M&K’s oeuvre occupies a spot that connects in a way that is both visceral and comforting. How or why is immaterial, as the world skites ever closer to the U-bend, this is a pretty cool antidote to the grind on my telly.