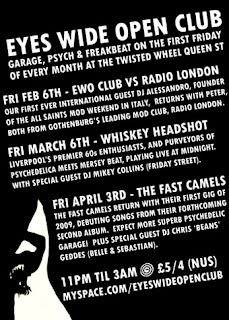 Posted by Lindsay Hutton at 6:08 PM No comments: 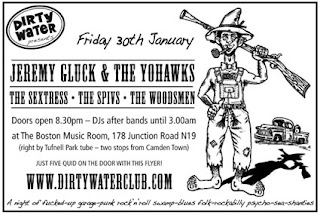 Posted by Lindsay Hutton at 6:06 PM No comments: 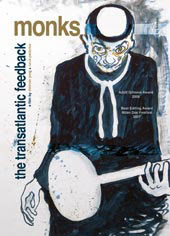 So yeah, "The Transatlantic Feedback" was the latest instalment of the Monorail Film Club on Sunday past. The fact that a documentary like this exists in the first place is a testament to the influence of the subject and the temerity of the film-makers. The influence of these five GI's pioneering work in deconstructing sound has been recognised and reverberates constantly throughout the oeuvre of much of today's music. Mr Cruickshank has a theory that their "managers" were aping what Chris Stamp and Kit Lambert were doing with The Who. The suggestion that the band was engineered by these individuals burst the bubble for several people who attended the screening. I think they'd rather that revelation hadn't been floated. However, there's no disputing that seeing those Beat Club clips in such great shape indicated just what a force of nature that the monks were.

The way the story is told is a departure from how these things often play out. The guys tell their own story and the talking heads are kept to a minimum. There will be a lot more by way of extras on the DVD release and you can sit in your living rooms and get to grips with those. Meanwhile it was a joy to see it on a cinema screen and hopefully there are still a few places out there where you can catch it on the big screen.

I think Roger passed away before the film was finished and of course, Dave Day died last year. It was to my eternal torment that we couldn't hear his banjo to full effect during the London show. still you cannae win them all. It must be a trip to experience someone who never heard these guys before. The film was introduced by John Cooper who went to great lengths to organise this loan from Dietmar at Play Loud! He told the story of his long quest to get a hold of the album which is almost impossible in this day and age, when you can just make a pitstop at a website or whatever to ease whatever particular jones.

The throng gathered in that place of worship known as the GFT certainly appreciated his efforts in getting the film here. The DVD is available now I understand and me reckon that you NBT types will dig it a great deal. If you can't hold out for the cinematic experience, and sadly this ain't heading to any multiplex soon, then roll the heck up.

Next month's MFC film (part of Glasgow Film Festival) is "The Wrecking Crew", to be introduced by, er, me...