The responsibility of updating this thing daily is getting to me. Again. Heck, it’s difficult to come up with a snappy facebook status let alone compile an anecdote or review. I’m doing my best but am more than aware that this is not necessarily good enough. Kind of like the modern equivalent of when an issue of the fanzine came out. People would ask, probably with the best of intentions, when the next issue would be. On that score, Mr Percival brought this to my attention and no, I’m not reprinting them so please don’t ask but blimey… I have an inkling as to who the seller was but I’m not certain.

One aspect of my existence that shows no signs of abating is my ability to procrastinate. I fear also that I over-subscribe to the doctrines of Larry David and his angle on calling etiquette. I value space and respect that of others but in one particular instance, there’s something that I need to do. It’s something I should have done a long time ago but the opportunity never arose. At the same time, I’m a little reticent. Of course, it’s completely in my dna to expect the negative. I’ve been like that all my days, it’s a defence mechanism of sorts. Still, in the infinite possibility that everything happens for a reason – I feel like I need to give it a shot. Wouldn’t say I’m “feart” exactly but something bordering that like “apprehensive” mayhap.

I keep getting asked about what I think about The Stooges being indicted into that HOF business. You say inducted, I say indicted… you know how the next bit goes. Good luck to them, I hope it works out in the long green department. As for the live clip, I turned that off. At those prices, the attendees should get a piece of the stage to take home – not just be able to “invade” it. Embarrassing is a word that springs to mind although before I get accused of contrariness, please respect my right to have an opinion that may not chime with yours with regard to athis. I know you’re happy for them, I am too but wasn’t part of the (no) fun the fact that the establishment loathed them? “He’s Iggy – he’s supposed to be annoying” said one chap. It’s a fine line between that and irritating and Wee Jimmy crossed that some time ago in my estimation. Er, thanks for enquiring.

I’m feeling disenfranchised today. One of those “there has to be more to existing that this” kind of fugs that takes a while to pass. I’ve met people who claim not to get these but I believe such claims to be blethers. Not being bubbly or bright (in any sense of the second word there) can sometimes be an advantage but not when it segues into full-on depression. I don’t really have much to despair about and am very busy with this and that. I should be content that anybody gives a hoot let alone anything else. The rats and their frantic race are getting on my wick and my own personal fuse might just be getting shorter. If that’s possible.

It would be cool not to black out as soon as I sit in front of the TV but I think someone might be trying to tell me something with that.
Posted by Lindsay Hutton at 6:06 PM 1 comment: 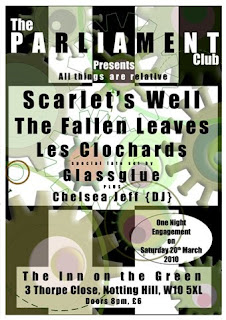 Posted by Lindsay Hutton at 5:47 PM No comments: