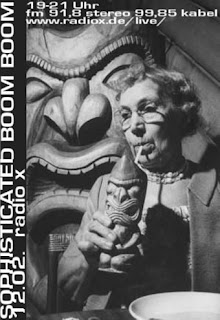 Posted by Lindsay Hutton at 6:01 PM No comments:

Following on from the Moon Duo stuff yesterday, I believe it hits the racks today so go get it and bake in its sonic majesty. These people do it right. They drip feed their mesmeric excursions in short number. Although this could be considered a long player because of the length of the four cuts, it’s really a mini album. But what matters is that it’s wall to wall enriching. The y don’t deal in filler. A lot of guff is spread around with regard to psychedelic music but this swirls into places that your mind ain’t been for a while if ever. “Escape” is a space rock concerto in 4 movements. It sounds like it was conducted by Joe Meek using a bizarre world Tornados (or “oes” if you prefer the American spelling).

“Motorcycle, I Love You” revs in like a theme from a never made ITC show that could have been called Department X. This wax before that letter became synonymous with karaoke and worse. There’s a cinematic aspect to Moon Duo that isn’t entirely present in Wooden Shjips. These are soundtrack pieces waiting to be synched with something pretty far out. “In the Trees” is like Neu cut loose in Badalamenti’s “Pink Room” and they’re bouncing off the walls. The title track imagines Rev/Vega hurtling back through space and time to crash the recording sesh for Al Casey’s “Surfin’ Hootenanny”. Peculiar things be goin’ down on the percussion front.

Apocaleptic music for the mind and body, a leading practitioner* of Rawkology has called it “Kraut Mask Replica” *. It's quite a squall alright.