RIP - Iain Burgess (thanks to Ben for the info)
Posted by Lindsay Hutton at 5:36 PM No comments:

Posted by Lindsay Hutton at 2:09 PM No comments: 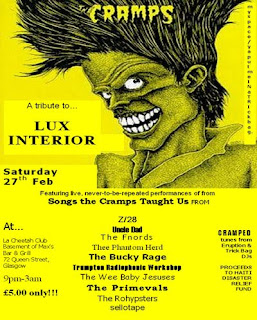 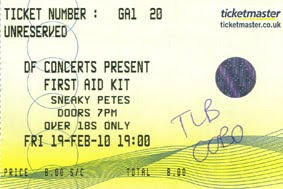 This is the third time I started this. Last two, there have been power outages so who knows, maybe this one will go the same way. So, I was saying. Yesterday had a bit of a medical flavour to it. Visited my dad in hospital, Mr Henderson recommended a combo by the name of The Ambulances and saw First Aid Kit in Edinburgh at an altogether too small location.

That said, Sneaky Pete's was not as I remembered it. Could I have seen The Cateran there in a previous life? Definitely Dan Penn and Spooner Oldham and The Queers (not together) upstairs at a place called The Attic. SP’s is very small and holds about 100 with sightlines a bit skew wiff behind the big supporting pillar toward the stage. The sound however was excellent and the audience surprisingly attentive for both acts. Quite a rare occurrence these days. Gibbering and phone antics were kept to a minimum.

Openers, The Last Battle exuded a Paradise Motel/quiet Arctic Fire type vibe. A wee bit Fence Collective but to my mind better than Kaptain Kreosote or whatever that guy’s name is. Actually I know exactly what his name is but I just took the opportunity to drop in a wee funny. Or maybe you don’t think so. I think that TLB come from Edinburgh and there’ a kind of Swede aesthetic to their sound. Bit heavy on the maritime subject matter but most enjoyable and their set was just the right length to leave on a high note.

First Aid Kit are something else. If you’ve heard the album then you get the message but in person this takes on an additional dimension. The two sisters, Johanna is the one with the Miriam Linna bangs, Klara the sort of less communicative one that gets razzed by her sibling all the time are joined by a drummer/percussionist and the sound they can kick up is an organic dream. Taking equipment blips and false starts in their stride like seasoned professionals, their 50 minutes flew by in an instant. Forsaking the equipment to sing “Ghost Town”, the shiver to spine ratio was pretty damn high. They got a lot of attention on the back of their Fleet Foxes cover but their own material is just so much better. I can’t remember if the last song “I Met Up With The King” was the one where Klara did a Keith Emerson flourish and ended the song with her leg on the keyboard a la Jerry Lee. They really ripped it up. They have a charming line in clowning and the chops of champions.

Wrapping with a rousing version of Gram’s “Still Feeling Blue” and a “field” version of “Waltzing With Richard” in the audience. It was over. I urge anybody who can to go to Tuts in Glasgow and catch them tonight because the additional banter that’s likely to ensue should be pretty entertaining in itself. Likely to go on to much bigger things, First Aid Kit comprises a little tonic for what ails all of we.

An extensive UK tour is underway now, check their myspace for details. SXSW after that.