Left the bunker around 5.30am this morning because I have to make up time for an appointment next week. It was damp, dark and generally unpleasant. It seems like we jumped autumnal and dove straight into winter. While it ain’t freezing, the insidious wet has a tendency just to make things miserable. This is not to be confused with good old rain, which can be invigorating. If you get caught in it on the way to someplace you have a change of clothes. However, it’s Friday and although I should go to the town – I’ve decided to put that off until the crack o’ dawn tomorrow. The idea at this point is to make some kind of progress on some front. Not entirely sure where that will fall but there’s work to be done for sure. 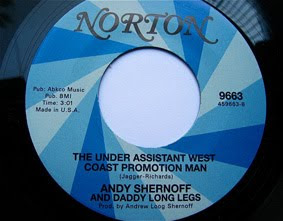 And as a precursor to that, the big news is that Sir Andy Shernoff has a 45 coming out on the exquisite Norton imprint next week, part of the Rolling Stones series – a split with Brooklyn’s Daddy Longlegs.

In the interests of the grand clear out, I may list some items on here and if you want any of ‘em then the deal is that you make a reasonable donation (maybe I’ll make a suggestion of a minimum) to an animal charity or some other deserving organisation. It’s a trust thing and I reckon that you folks are upstanding citizens, right?

The way it works is this – I get rid of some clutter, you get something you want (or think you can flog on ebay) and a good cause gets some dosh. Keep checking back here, don’t rely on it appearing on facebook at the same time because that can be way out of whack. Posters, ‘zines, books, CDs, records, all kinds of guff.

Don’t forget that Wreckless Eric and Amy Rigby will be in Scotland and elsewhere in the UK starting next Thursday (16th – Edinburgh). If anybody can’t get to a show and would like to score a (signed) copy of their “Two-Way Family Favourites” album then holler before next Wednesday and I’ll hook you up. E-mail me and we can sort out the finer details.

So that’s your lot for now. Verily his face was shut.
Posted by Lindsay Hutton at 4:07 PM No comments:
Newer Posts Older Posts Home
Subscribe to: Posts (Atom)