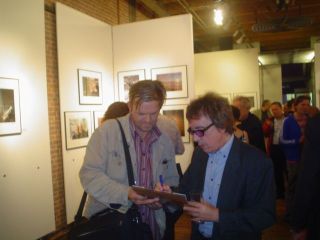 That's A Fistfull Of Records label-boss Jos there with Bill Wyman, pictured last Thursday at the opening of Bill's photo exhibit in Rotterdam.
Yeah, you figured that with my absence on the NBT blog my life was pretty lame right? Not so, me 'n my friends are hanging out with the stars!

OK, truth be told; I just took the pic and got a nasty look from Bill when the flash went off...

Right now it's rainin' outside, complete with lightnin' 'n thunder. I guess the summer's finally over 'n done with. Time again to fire up HQ's hi-fi and return to this bloggin' biz. Maybe a good start is try 'n give you a rundown of what's been doin' the rounds on my trusty ol' Thorens.
Minor keys 'n vocal harmonies have topped my personal charts in recent weeks; the Zombies, Impressions, Hollies, Everly Brothers, Paragons and Searchers, they seemed to make plenty sense in that Indian summer daze...
The Music Machine's The Ultimate Turn On 2CD on Big Beat has also been takin' up plenty o' time, as did the amazin' Garagemental! comp on the same label. Thee album of this summer has been Johan's THX JHN, A-grade six-0 tune-age w/ hints of early, pre-lame, Undertones and REM. Not really sure what to make of those new Radio Birdman 'n New York Dolls discs... Some good tunes obviously, but taken in the grand scheme of things I'm not too sure if any of those will last alongside their past glories...
Wednesday the Dolls 'll play Amsterdam, and it'll be curious to see how things will turn out. After that we'll be leavin' for London later this month to catch the Fleshtones at the Dirty Water Club, and (hopefully) an NBT staff meeting...
Posted by Jeroen Vedder at 10:10 PM 1 comment: 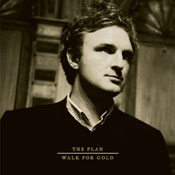 From the same stable as Hello Saferide, Razzia continues its foray into providing quality Scandanavian pop with The Plan. “Walk For Gold” moulds many influences into a rich tapestry and at first listen, the title cut sounds like an Arctic Monkeys pastiche. However, it soon mutates far beyond that. It's most likely coincidance but maybe it'll have the desired effect on radio producers ears who are conditioned to that "phenomenon"? This album is a little Luna-esque in places too, cool and dreamy. The organ sometimes makes me think a little of Procol Harum too. But that’s only because I’m old, no reflection on the finished product being some retro retread. The Plan is the alter ego of one Theodor Jensen. He’s assembled a cast of players to punctuate his songs with an orchestral dimension. It isn’t rock’n’roll. Anybody who can’t take something a little richer should change channel now. However if you want a breather then “Walk For Gold” will hit the spot. If this can be recreated live then he’s sorted. The cd single has a version of "Tonight You Belong To Me" as the additional track. You may recall the Steve Martin/Bernadette Peters version from "The Jerk". Nice Edward Gorey style jacket logo too.
Posted by Lindsay Hutton at 2:52 PM No comments:
Two new 45’s out on A Fistful Of Records! (Thanks to Jos for the info, e-mail for availability...)

These South Yorkshire young hopes spit out some short and shambling punkrock stompers , all packed with an excess of nervous energy. Daniel (gtr, vox) Andrew (bss, vox) and Bruce (drms, shouts) are barely in control. Crap attack punk without fake anger. Yep, easily the coolest thing on vinyl to come out of Sheffield since “Being Boiled/Circus of Death’ by The Human League way back in ’78. The Hipshakes play this year’s Gonerfest III in Memphis, a euro-tour will follow later this year.

Straight outta the Italian Alps come Movie Star Junkies. Not many will have heard from these guys but they did do a UK-tour already ! Their songs are all Farfisa-drenched-madness, it sounds like they drank just a bit too much of that Suicide/Scientists-potion and are freaking out on it. At the same time they won’t deny their mountain-village backgrounds, I mean places where people still rape pigs and eat them afterwards….hell, what more do you need to know, huh ? Anyway, you won’t get it any Bruttier, Sporchier and Cattivier than from these guys ! Tour of Germany, France and Holland by the end of October/ early November. 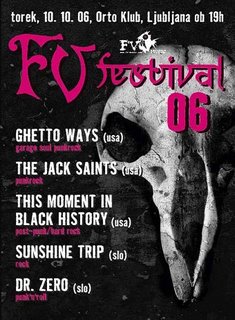 Further info... (thanks to Monika for the jpeg)
Posted by Lindsay Hutton at 1:47 PM No comments:
Newer Posts Older Posts Home
Subscribe to: Posts (Atom)