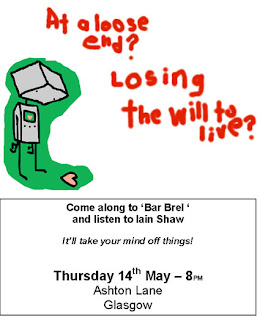 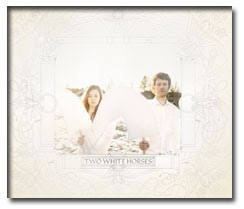 I never made the connection between Two White Horses and where the name comes from before. Lovisa and Jakob Nyström weren’t even born when Tir na nOg originally roamed the earth. Were they on Chrysalis or was it Island? I don’t recall but it’s a pretty cool connection this far down the line.

And it doesn’t quit there, because this brother/sister combo are dealing some very cool folk pop here that wouldn’t have been out of place on either of those imprints several lifetimes ago. You may recognise the names as being members of Säkert! So you know that you’re not dealing with some musical chopped liver here. Their debut contains originals rubbing shoulders with smart cover versions. Best of these on first impressions is the treatment of The Equals “Good Times Are Gone Forever”. Reduced to an assured Velvet Underground flavoured rumble.

You might not think you ever need to hear another cover of “Super Trouper” but I think you’ll appreciate the Kraftwerkised twist on the backdrop to this one. Love what they’ve done to El Perro Del Mar’s “Candy” too. Their own, reflective “Eyes of the Noble” and “Statues and Ponds” have an understated grace as does “Face Me Now”. The simple orchestration is the key to what makes this introduction to the duo all the more captivating.

Let TWH get a cool kind of mediaeval on you, you won’t regret a second of it.

Out now on the Stand By Your Band label.
Posted by Lindsay Hutton at 6:05 AM No comments:
Newer Posts Older Posts Home
Subscribe to: Posts (Atom)