My bloody ISP is gubbed again today so if you sent me an e-mail then who knows exactly where in the ether it is. Not me.

Saw the Pistols "There'll Always Be An England" last night. Having heard that it was worth watching, I put it on my Lovefilm list and it arrived before the final episode of The Wire. Not an ideal situation but I'll let that slide. Filmed over several nights at Brixton (Carling) Academy, the concert part is reasonable to bloody awful. Lydon appeared to be having a gurning contest with the audience but his "Wilfrid Brambell" sealed the deal. There were flashes of Lee Evans doing Charles Laughton too, and they say country music isn't pretty.

Even in the wildest reaches of "ever get the feeling you've been cheated" they could never have expected it all to turn out like this. But it's all about pantomime and while I'm happy to see the, er, "kids" having fun then I'll just sit this one out. Some of it is pretty embarrassing but I'll leave you to figure it out. The guide to London by the band was entertaining though and Jones is equal parts Peter Cook and Harry H Corbett.

Should you see it? Probably, if you're interested. Considering the "songbook", there was this band that played in Spain a couple or three weeks ago that for my money (the value of which is plummeting as I type) stands up way better. Johnny Lydon has just turned up on TV here doing a butter ad. Let's face it, he was never a singer anyway was he?

So anyway, I'm off into Edinburgh to rendezvous with Mr Thewlis for a wee while... depending on where you find yourself, you may like to consider the following.

For those in Glasgow who have an itch to scratch in terms of appearing in a pop video...

"Glasgow's Attic Lights are looking for extras to be in the audience for a video shoot for their new single "Late Night Sunshine". If you are over 18 and fancy coming along to listen to the same song for a few hours and to meet the band, head for Stereo, Renfield Lane, Glasgow at 6.30pm on Thur 23rd Oct. This would be a great opportunity to get your copy of their debut album "Friday Night Lights" signed by the band."

If you're in NY then there's only one one game in town tonight... 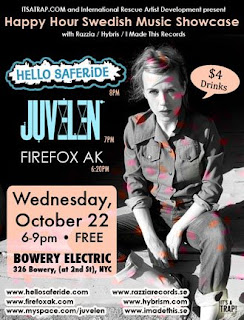 If you're in Barcelona there's a groovy music film festival starting tomorrow that includes a screening of "The Wrecking Crew". In-Edit Beefeater (I've no idea what that refers to) runs from October 23rd until November 2nd.

I'm sure there was something else I meant to run by you but that particular morsel eludes me for now.