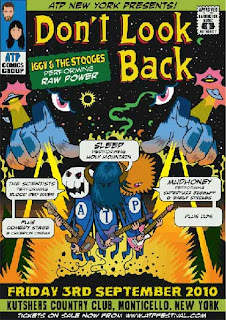 It seems absurd to me to be mentioning something that is happening in September 2010 but when The Scientists are involved I make an exception. Mark (Arm) told me that they would probably be playing with the Stooges in NY in September, just prior to seeing Iggy's fizzog on the side of a bus. It was an omen and I think it freaked Mark out just a wee bit. Not the thing you'd expect on the street in Edinburgh.

Auld Reekie played a huge part in Mr Pop becoming the new Ozzy (kinda). Anyway, all the info you need is here.

And while you're at it, have a wee look at the deluxe version of Spiritualized's "Ladies and Gentlemen..." that's poised to appear.
Posted by Lindsay Hutton at 10:20 AM No comments:

Just so you know, I could be out the back of the bunker right now. Punting a gondola up and down the new boating lake but I’ve decided that I ought to get to some blogging. Maybe catch up on stuff that I meant to draw your attention to.

I picked up a tabloid format paper called Loud and Quiet that’s getting national distro now. It’s pretty good and note as prone to layout don’ts as The Stool Pigeon. Not sure that I’m up on much of the stuff they cover but it’s not done in an impenetrable smartass hipster style so more power to them. If your local (UK) record store deals with Forte then you should be able to score a copy there.

And while we’re on the subject of publications you can pick up for free, anybody who’s visiting these parts and indeed anyone who lives in Central Scotchland ought to pick up The Skinny. It’s a free paper that has exhaustive gig and club info for the entire month ahead and to my mind it trumps The List these days. Plus, the price is right. Again, much of the music they cover is outside of my remit (ie – I divnae care for it) but recently they had Mudhoney and Yo La Tengo in there. I like Phoebe Henderson’s sex column, it reminds me of something that might have been in Al Goldstein’s Screw back in the last century. I don’t think I ever saw any of those that Mike Edison was involved with. The Skinny is also online so you can plan your schedule that way too. Some music then... 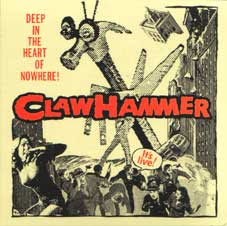 Any band worth their salt will tell you that they’ve been booked to play a gig to almost no-one. Almost no-one generally being the bar staff who are quite possibly earning more than the entertainers. On the night that Clawhammer played Dallas in May 1995 there were two people watching them. It’s not clear whether that was over and above the people working there but that’s not so important. "Deep In The Heart of Nowhere!" Was recorded that fateful night and Munster have issued this document under some sort of freedom of information edict and as ugly blues goes it’s pretty hard to beat. Check this – from Bob Lee’s liner notes... “we plowed (that’s how American’s spell ploughed) into an epic version of Sick Fish Belly Up that deteriorated into one of the most spastic, earsplitting, fist up the yang noise jams I have ever been part of”. The rest of the performance is pretty ramped up too. Clawhammer was never about half measures. 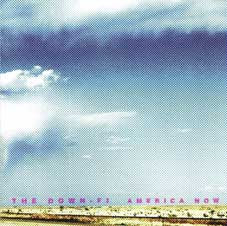 My nerves were a wee bit fried after this so I figured that I’d go for something a little more subtle. Ah, American music. When it’s done right then it really hits the spot. The Down-fi has done just that on “America Now”. This isn’t roots rock, or rather it is but a different type of root altogether. That permeated by the Velvet Underground and dragged through Cleveland tied to the back of a truck. This is that strain of rock’n’roll music. The DF includes Craig Bell who you’ll know from being one of Rocket From The Tombs. The Cleveland band that could have altered the course of popular music, there’s even a Eighteen-esque version of “So Cold” on here to reinforce that claim. Add a smidge of Buffalo Springfield jangle psych and then you’re in the ballpark of what these guys sound like.

It’s evocative of obscure US 45’s, the like of which you would have been happy to part with 3 quid each in the days of Hot Licks and Bruces. But it’s happening now, straight outta Indianapolis. “’62 Hawk” has a muscular Peter Gunn type undertow and it’s cool to hear Craig resurrect Peter Finch’s “mad as hell” tirade for “Network".

The Down-fi really swing. It sounds like they’re having a great time cranking it out and thusly, you’ll have a ball soaking it up. 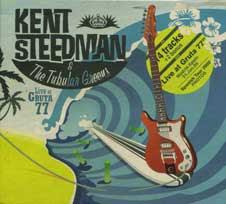 So time to crank it up again with a different kind of intensity with Kent Steedman and The Tubular Greens – Live at Gruta 77 in January 2005. Once again, that country displays its impeccable R’n’R credentials by being the origin of this DVD/CD double whammy. The Celibate Rifle enlists the services of a crack Espanan (is that even a word?) combo to pummel and pogo a set of Aussie Rock gold into the noggins of those of us who couldn’t be present on the night. Fernando and Miguel Pardo of Sex Museum take up guitar and vocal duties.

And let’s not forget the stoic solid bass stylings of the ever-present Juanco Lopez from the combo, Bummer amongst other things. Among the fray you get such Oz chestnuts as “Hindu Gods”, “C’mon”, “I’m Stranded” and “Born out of Time” plus plenty more. All delivered with a sucker punch. Not a tribute but a celebration. There’s a BIG difference.

Stuff to be done ahead of heading into Glasgow for the M&K shindig later. They’re full blown pop stars in the USA now and are at Oran Mor tonight opening for a Swedish band called The Sounds. I need to go score some mobile phone top up and other lowly bullshit. Yes, I should assign a card to this but I’m still basically opposed to these things. So I like to make it difficult y’dig?

And I need to check that the trains are running. Some bugger might have spread leaves on the tracks and you know where that leads don’tcha? That question is directed to folks in the UK, I know that you Europeans have trains that can handle such things. Maybe you could hep Scotrail to exactly how that works?

Finally, I meant to catch Daniel Johnston when he came through here recently but completely missed it. Here’s a Narduar interview clip that I found sort of uncomfortable but yet compelling.

And finally for this section of the program, this just in via Robert Hull on facebook. David Lynch’s Dirty Dancing. Sorry, it ain’t embeddable.
Posted by Lindsay Hutton at 8:36 AM 2 comments:
Newer Posts Older Posts Home
Subscribe to: Posts (Atom)