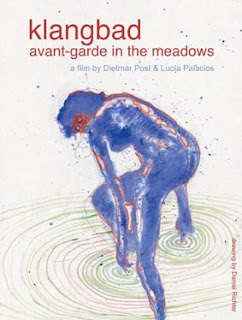 Those groovy play loud! people are at it again. Having put The Monks on the map, their film-making exploits this time take in the Klangbad festival and also an extended Faust set.

Faust was one of the first German bands I ever encountered. Working in the local record store, everyone was fascinated by the clear vinyl in a clear sleeve with a hand x-ray visible through it. The music on it was way ahead of the curve to the point of being virtually scary. An odd kind of ambient that required an altered mindset to really get into. Or so it seemed. I can’t claim to be sophisticated now but way back then this was really exotic. Maybe it wasn’t even music, it sounded like notes from outer space. When Virgin launched their record label, they released The Faust Tapes, an album for the price of a single – 49p I think it was.

Orbit, the shop I worked in did it for 43p if I recall correctly. Anyway, we sold bings of them to people of all ages. Strangely no-one returned them thinking they were faulty because the sonic content might not be what they were used to. Not even the old ladies that normally bought Charley Pride records. Or Sydney Devine. 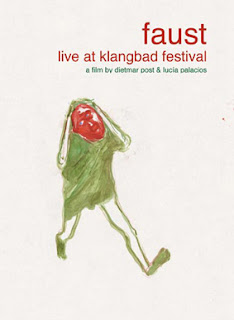 This latest play loud! release contains two films, “klangbad, avant garde in the meadows” and “faust – live at klangbad festival”. The first on chronicles the 2005 event and provides a first hand account of something far, far from what a “festival” has become. “No bouncers, no stupid marketing games, no bungee jumping” like the liner notes determine. The line up is similarly out there with the pastoral setting providing to a background to acts, most of which I had no idea existed. A little like an idyllicly set version of the “le weekend” in Stirling.

When I contacted Dietmar to tell him that Faust would be coming to Scotland this fall, he asked me “which Faust?”. He told me that “there is one with JP Hervon (Faust North) and the other one around HJ Irmler (Faust South). It just proves that Faust is more an idea than songs and/or a band.” This isn't one of those cases like The Drifters, I hasten to add. Not even opposite sides despite the geography of the same coin.

When I sent him the link, he confirmed that the band that will play Stirling on October 17th is Faust (North) not the one that can be seen in these films. It would seem that performances of their southern manifestation are much more rare, making it essential that you grab this document.

While not exactly a walk in the park despite the setting, the world of this concept is definitely an attractive one if you just let the sound wash around you. Dietmar Post and Lucia Palacios have put together another fine project, taking the blueprint of direct cinema and skewing it slightly to create a study of what would otherwise take place completely removed from the pulsebeat. They also issued the band’s first single but more about that when I manage to get around to reviewing some records.

Here are the trailers for both films...