Posted by Lindsay Hutton at 4:13 PM No comments:

Posted by Lindsay Hutton at 12:18 PM No comments: 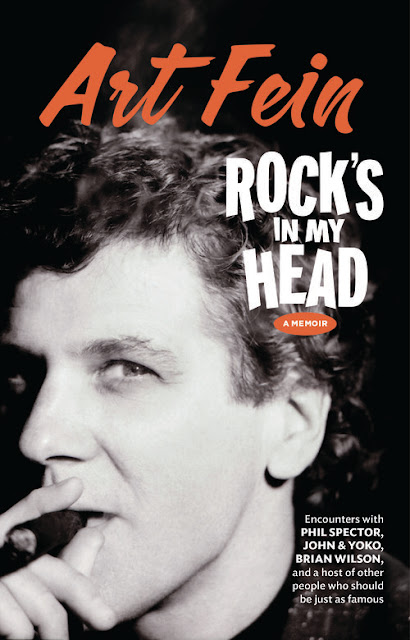 Posted by Lindsay Hutton at 4:50 PM No comments:

Posted by Lindsay Hutton at 6:14 AM No comments:

KICKSVILLE RADIO - THEM KICKS JUST GOT EASIER TO FIND! 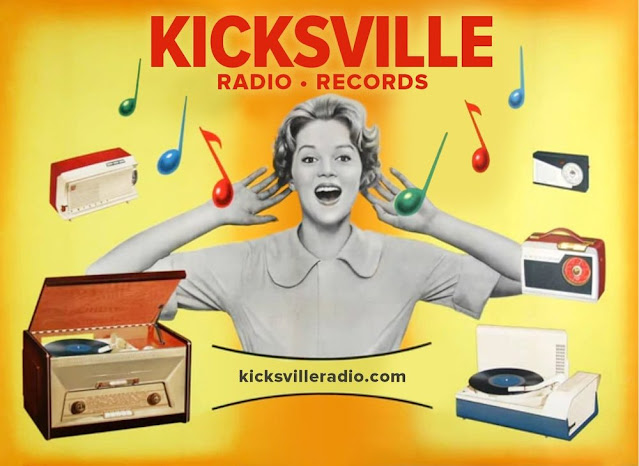 Posted by Lindsay Hutton at 6:27 AM No comments:

Posted by Lindsay Hutton at 3:26 PM No comments: 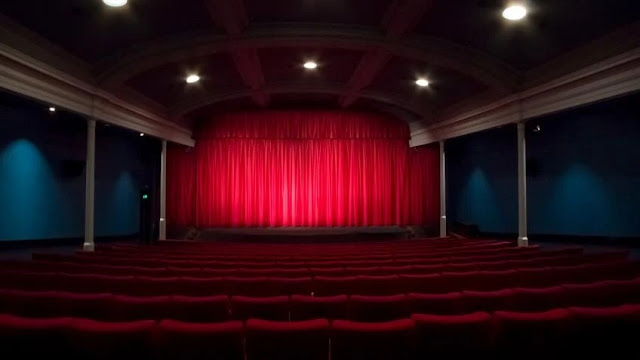 Posted by Lindsay Hutton at 3:55 PM No comments: 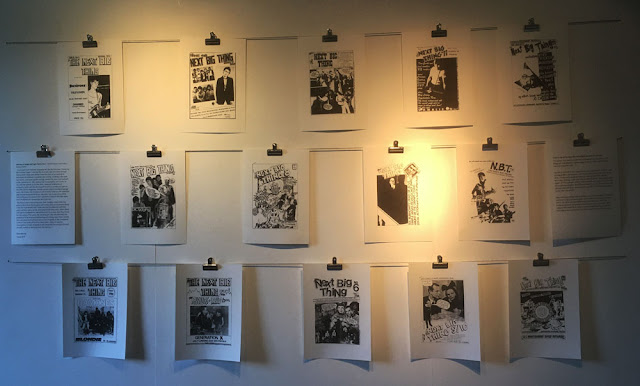 These are risograph print reproductions of the NBT covers in the SCENES exhibit.

Sets are available to good homes that would like to adopt such a thing. The print process dictated that it wasn't economically viable to run just one so there are 21. One could call it a limited edition. Yes, there aren’t many but demand will determine desirability. These look better than the real thing, like the photos of those commemorative plates in the Sunday paper supplements, but in reverse.

The short of all this is, do you care? They're collected in an A3 plastic zip top pocket comprising 15 prints. I’m not sure what you’ll do with them but they’re nice. Too groovy for the recycle bin but I’m under no illusion that they’re just ‘stuff’.Thanks to Paul Choi for sorting out the wee overrun and to Good Press in Glasgow for the excellent repro quality. I’m not numbering them so you don't have to worry about that. When they’re gone...
I'm not selling them, we can sort out postage and you make a donation to a food bank or some other charity that isn't headed up by a parasite sucking up some big salary. Send me a message if you're interested and we'll figure the detail out.
Posted by Lindsay Hutton at 7:38 AM 1 comment:

Posted by Lindsay Hutton at 6:23 AM No comments:

Posted by Lindsay Hutton at 6:13 AM No comments:

Posted by Lindsay Hutton at 4:45 PM No comments:

BACK TO THE BENIDROME - FUNTASTIC REPORT 2022

You’ll likely notice that I don’t really blather here much but that silence needs to be broken in order to give you my skinny on the premier annual punk rock, power popping clan gathering that was FUNTASTIC DRACULA CARNIVAL Episode 17 in Benidorm. Making my way from the pre-shindig aperatif session, I wandered by Backstage Bar as the strains of “Heading For The Texas Border” blared forth. Me myself? I was heading for the Flamingo hotel so this signalled to me that the spirit of Roy Loney was present and that all was well. Something that crossed my mind was that maybe it would be an idea for a bunch of us to buy the old KU UFO and turn it into a retirement complex.
I found out that the popular holiday destination is referred to by locals as Zonaguiri. Guiris are those ugly foreign visitors that stink up the resorts along that coast and further afield, they’re often Plague Islanders. Friday’s highlight was The Wildebeests who were there at the behest of headliner Wild Billy Childish and CTMF. The intrepid trio acted as a conduit to make this long-pursued appearance happen and Medway enthusiasts witnessed a unique spectacle that was available for that one night only. in my head, I was yelling the words to "La Ciudad Huele a Sudor" at La Riviera in Madrid where my favourite band was playing the second of two shows before they made their debut in Mexico. I realise this may be considered sacrilege in some quarters but I can’t lie about something this important.
One of the absolute top notch aspects of attending Funtastic is that you meet people you’ve known for verging on forever but have never been in the same vicinity. Meeting Mike and Anja Stax with the rest of The Loons was one such escapade and gracias Lenny Helsing for making that happen. In addition, their full-blooded beat attack was a highlight and a half of Saturday night. Earlier, Los Retumbes started the proceedings doing what they do so well. The Josephine Network brought a Laurel Canyon-style pop and drizzled it with a Lower East Side New York pop/soul element that really stood out to an almost orchestral degree. In addition, Rata Negra specialised in post-punk that swings and The Zodiac Killers also delivered the goods. Seeing an empty Buckfast bottle on the way to the venue made me wonder about the rocket that might have discarded it.

I don’t know which DJ was served up the Eddie and The Hot Rods, Dr Feelgood, Bilbo Baggins sequence but they’re doing excellent missionary work. And Eloy played "Downtown" as interpreted by The Cuban Heels. On the third night, The Scientists "Swampland" was playing as I walked in. Another positive omen. 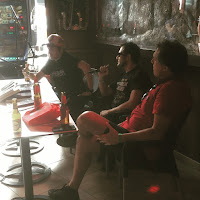 The festivities in Penelope end at 8am each morning after the night before. That gives the revellers time to get almost no rest before it’s time to take in the Sunday lunchtime entertainment at Rockstar Bar. La Moto de Fernan blew away the cobwebs in the basement of said establishment as did Metalleg who I missed because I was keen to attend the launch Pepe Kubrick’s book “El único juego en la ciudad” (The Only Game In The City) with Ivan from Chopper Monster in MadToon and publisher Tony DevilDog who is also the man that runs Family Spree Recordings (see picture to your immediate right).
On Sunday night, Los Malinches cross fertilised a Fleshtone-y garage romp with early Santana to come up with my pick of that night. They set a bloody high bar for anybody to follow. Those guys put Vanessa Varona and I through our paces doen in the ‘pit’. Uni Boys were the hot ticket and they’re almost nearly pretty good, earning bonus points for pitching in with a version of The Ramones "Slug". Biznaga was one of the acts that represented what is perhaps the dawning of the next intake. Having young bands to attract a younger audience is a good move. They have a song called “Madrid” with a video that that was filmed in Weirdo! Bar so obviously I approve of that. They remind me of The Gaslight Anthem or something. I get why they’re popular but they ain’t no Ginebras. I’d never seen The Meanies but have followed their oeuvre forever, they did the business when I was flagging a bit. As ever, Daddy Long Legs brought the roof in. The place was jumping and then some when I left on Dia 3 having taken a flier down a ‘surprise’ step. Entirely my own eejit fault.
El Coche Funtastico will rev up again next year (12/13/14 October 2023) leaving all other attempts to create such a party in the dust. ECF is what Knight Rider is called in Spain but I’m sure the Hoff would approve of this adaptation to mark the occasion of the greatest event of its type to happens over the course of any year. Many have tried but no actual cigar has been won. It’s all about the good natured delinquency of the attendees. That's what makes it. The facilitators of the madness, Paloma, Varo, Mikael and their crew did us proud again. The monster turns 18 next year, almost old enough to drink. Eeek!
Rock ‘n roll kicks for teenagers of all ages. It was a real pleasure to see so many familiar faces again and I really hope I’m around and able to make the scene again in the ’23. I'll post the link to the ZigPix when it becomes available.
Terrible snaps by me.
Posted by Lindsay Hutton at 10:15 AM No comments:

Posted by Lindsay Hutton at 12:19 PM No comments: 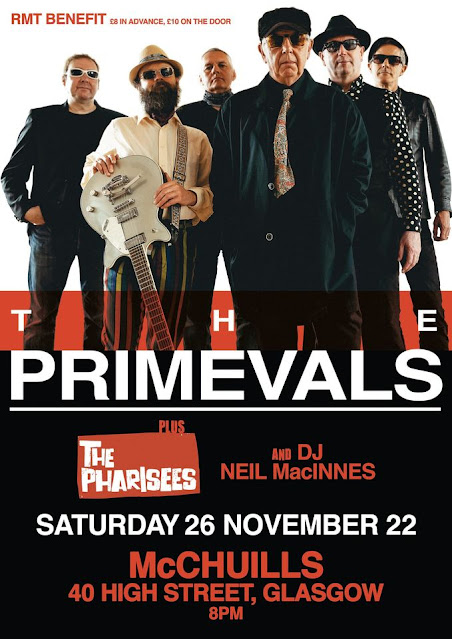 Posted by Lindsay Hutton at 12:17 PM No comments:

MY FUNTASTIC HIT PICKS WHILE I FIND MY MIND - LOS MALINCHES