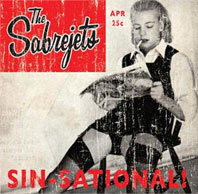 The Sabrejets “Sin-Sational” (Raucous) isn’t gonna be nominated for no mercury or any other planet music prizes anytime soon and that’s a good thing. Their fare is “greasy rock’n’roll” like it always was. Ideally enjoyed at blood-curdling volume live in a bar, these Belfast geezers have a long track record of delivering the goods. The notion of authenticity or conforming to a purist notion doesn’t fly here because this music is in these guys dna. Rockabilly in general exists in a backwater these days. The form has been pillaged every which way and like burlesque it has crept into areas of the mainstream. This double edged sword means that there are a lot of toothless perpetrators out there but this ain’t one of those.

17 songs maybe a little too much to digest in these ADD-addled times but the 13 originals and 4 covers include runs through “Ultra Twist” and “Blitzkrieg Bop”. “Sin-Sational” is guilty as charged and a Friday or Saturday night in the company of these guys down the pub would be a hoot indeed. Hope there’s an opportunity to road test that theory one of these days. 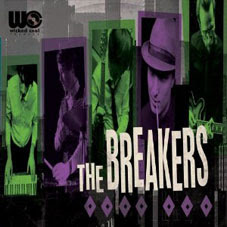 I didn’t actually plan for this to turn into a thread that would deal with up to the minute takes on sounds from yesteryear but next up was The Breakers self-titled debut (but actual third album) for Wicked Cool. Harking from Denmark, these guys apparently opened for Bon Jovi in Europe during the time period known as Summer. I say that because there was precious little evidence of the big yellow ball anywhere around here. So anyways, theirs is a big sound that crosses The Fleshtones with their gaffer’s Disciples of Soul. Is there a boardwalk in Copenhagen?

Crowd-pleasing stuff then and while not exactly Henning Staerk-tastic, these guys actually have tunes to back up the moves with the possible exception of “New York City” that reminds me of Hipsway or Love and Money. Shudder. The singer, Toke Nisted, sounds like Chris Farlowe moonlighting as Rod Stewart and there’s not a damn thing wrong with that. I notice that there’s Van Zandt writing credit on many of the tracks too. He’s a shrewd guy and evidently not without taste because he loves The Dahlmanns.

I was talking back yonder about authenticity and the late 60’s ambience is all about that. If The Breakers cut it live then they could find themselves in demand. Like The One-ders in “That Thing You Do”. And I can certainly hear Southside Johnny Lyons singing “Soulfire”. 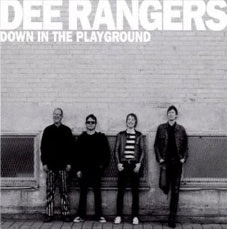 Sticking with Scandinavia – this time in Sweden, Dee Rangers “Down In The Playground” (Suckers Choice) is also channelling the past but in an altogether more organic and warm way. I’m not sure if there’s any “hot concrete” involved but I think this is their best sounding record to date.

Those keyboard swirls are definitely hitting the spot and where that last album conjured up memories of groups I’d rather forget, The DR’s reminded me of The Creeps rather than gave me them. There’s a Ramonesness to the artwork concept too that works on a subliminal level. Understated even. The mix of jangle and farfisa strikes a cool balance over the course. Mans did a great job with this.

The instro “Powerslam III” takes a flavour of Toni Basil’s “Mickey” and extends it into a hopped up Graham Bond extravaganza. DITP also includes the best cover of “First I Look At The Purse” since the J Geils version on “Full House”. 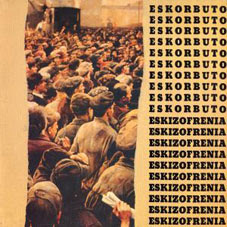 The Munster reissue of Eskorbuto’s “Eskizofrenia” is nothing like any of these previous three. An influence on the Spanish and Latin American punk scenes, it sounds like it came out of Eastern Europe. They came from Santurtzi in the Basque Country.

Intensely political and designed to rouse the rabble – these short, sharp bursts don’t make for easy listening but the energy level is intense. I’m listening to this on CD but I’d imagine that the vinyl would resonate with a deeper, cleaner rage. This is very much analog music that should be attached like an unexploded device to downloads of whatever tosh the NME is flying the flag for this week. This stands up a damn sight better than any record by The Clash I’ve heard in recent times.

Actually, I heard “Rock The Casbah” this morning and just about brought up my haggis roll. Combat rot. (Munster is distributed in the UK by Shellshock)
Posted by Lindsay Hutton at 4:21 PM No comments:


(Thanks to Kris Needs via fb)
Posted by Lindsay Hutton at 4:07 PM No comments: 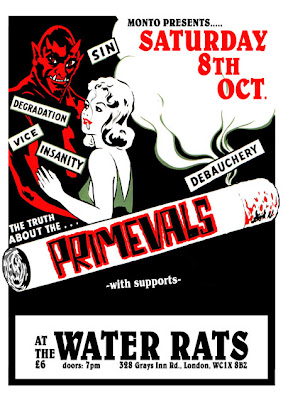