A Fistful of Records is a 7” label based in The Netherlands. They’re responsible for a steady trickle of fab 45 sized platters (some of which spin at 33) that will reaffirm your faith in this rock’n’roll thing. In this disposable age, it’s easy to just stick out a track as a file. It takes a certain disposition to go that extra few yards and create something that you can’t just “delete”. To forge something permanent, dressed in captivating hand-screened covers, all numbered for your collecting pleasure if that’s what floats your boat. 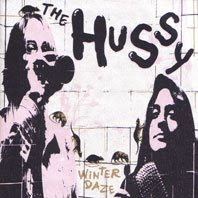 The Hussy are from Madison, WI (hey, that’s Ben W country!). Bobby and Heather Hussy have concocted 6 short, sharp bursts of primo punk rock action on this perfectly formed format. Not an ounce of flab and maximum use of floorspace available, gotta be impressed with that. I guarantee that “Drinking Song” will hit the spot, as will the other 5. 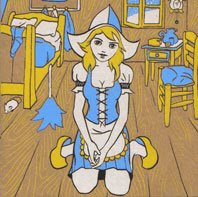 The Griefs are a proto-beat 3 piece from Ohio and “Little Dutch Maid” is a noisy little bisom. Just goes to show that you can’t judge the proverbial book. Nice little Kinks-ish (as opposed to kinky) twist in there. 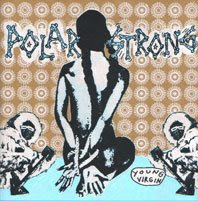 Polar Strong hail from Bordeaux and their “Young Virgin” EP is pressed on white wax and the cover recalls “Soldier Blue”. It contains the first recorded cover version of a Bassholes song “Platform Blues” which might hint at their trajectory. One of the new breed of French combos that dredge the more psychedelic, blues-ridded tar pits, the title track vocal sounds a little like Tom Verlaine. Murkier aspects of what Television might have sounded like if technology was in short supply. I imagine that these guys would kick up quite the stink in a club. 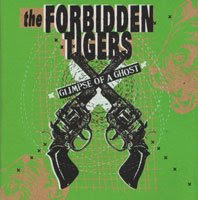 The Forbidden Tigers roam the plains of Nebraska looking for victims to pummel with their primal power pop yelping. And I’ll be darned if there isn’t a cut titled “Nebraska Plains” that sounds like The Black Lips might if they ever discover Johnny Horton. “Crab Nebula” sounds like a cut’n’shut Franz/Rezillos hybrid. Bracing stuff. 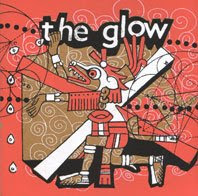 The Glow release has just 3 tracks and the first of these “Anthem No. 1” sounds like it was recorded in a submarine. Makes the first Panther Burns EP sound like a stereo sampler. From NY, there’s something a little Primal Scream-y about this and y’all know that such a thing is likely to rub yours truly the wrong way entirely. The closer “That Kind Of Feeling” is almost endearing in a kak-handed busking Velvets fashion but I think that I’ll stick with The Hussy. Maybe The Glow will be a grower?
Posted by Lindsay Hutton at 12:31 PM 1 comment:
When I woke up, I thought it was Monday.
Not for long but for long enough to discombobulate me.
It was a relief to find out it wisnae.
I'm writing sentences like this because something is awry with the formatting.
Probably because of yon big YouTube windaes...
Or maybe I just fancy pretending its a poem.

More through the course of today, meanwhile: