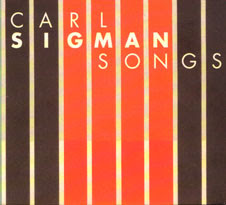 Did you ever hear of Carl Sigman?

I hadn’t until recently when The Chairman hooked me up with a copy of “Carl Sigman Songs”. A 3 cd set of material he wrote over a long, illustrious career. This has been put together by his sons to celebrate their father and they’ve got a lot to be proud of. I’ve been digging this stuff for weeks now. Always escaping back to it when I’d simply had enough of the countless mp3’s I get sent by acts that quite simply aren’t up to the task of writing anything approaching a real song, let alone perform one.

How does this grab you? “Pennsylvania 6-5000” (Glen Miller), “It’s Square But It Rocks” (Count Basie), Buena Sera (Louis Prima), the theme to Robin Hood (The Richard Greene TV show), “Ebb Tide” (Sinatra/The Platters), the fantastic “The Day That The Rains Came Down” (Jane Morgan), “It’s A Marshmallow World” (Darlene Love) and “It’s All In The Game (The Four Tops) to take but the tip of the proverbial iceberg.

When he passed away, in September 2000, Carl Sigman was 91 years old. I guess they call that a good innings. What a legacy to leave. Irrespective of things not being like they used to be in some kind of rose-tinted rear view mirror, this consistent quality of work is surely a benchmark. I can’t even begin to tell you how captivated I am by these songs. They capture an era that came before anybody could pastiche, or beat the life out of a song in the name of faux authenticity.

Things weren’t sullied by bean counters or would be experts. This was a job of work. And that job was to write songs and have them recorded. Did they think they would last? Probably not, but so much of this man's work has entered the dimension of “the standard”. He kicked off his career in 1936 when he co-wrote “Just Remember” with Johnny Mercer. From 1940, he penned words and music of songs that were covered by artists as diverse as Aretha Franklin, Elvis, Louis Armstrong and Dean Martin. Relative youngsters are probably familiar with “Enjoy Yourself (It’s Later Than You Think)” by The Specials? Mr Sigman came up with that one in 1950.

When all is said and done, and the production is laid on thick with a dirty great trowel – it all comes back to the song and this man is responsible for a shed load of the greatest ever written. Carl Sigman had the chops and there’s not much coming out in today’s crop that will stand the test of time like this. I’ll cut out now, before I start to sound too much like my granny.

“Majorsongs… one of the top US music catalogues” strikes me as an understatement.

(Sincere thanks to Michael and Randy Sigman for kindly acquainting me with their dad’s work)
Posted by Lindsay Hutton at 6:12 PM No comments:
Does this look like fun or what?

Posted by Lindsay Hutton at 5:29 PM No comments: 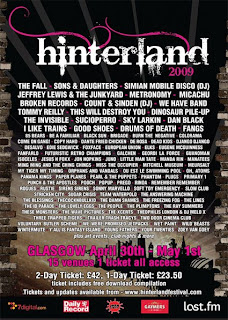 This is the closest that Glasgow has been to a SXSW type stramash since "In The City" dropped by several eons ago. Do you have the stamina? There are some good acts involved. Drop by the website and figure out what works for that schedule of yours...
(Click on the image to open it in a legible size)
Posted by Lindsay Hutton at 8:01 AM No comments:
Not sure whether to see "Let The Right One In" and "Religulous" today or tomorrow. The world is my proverbial lobster or some such crustacean and the weather is holding up too. Down hill must surely be just beyond the immediate horizon.

It's been reported elsewhere but incase you haven't seen it, those New York Dolls have a show at the 100 Club on May 14th. Maybe some of you kids from other countries fancy it? It's just like the old days down there. In the venue I mean - not "The London", Rock On has long since left Camden as has Compendium Books and all the other haunts. Any of you guys heard the new Dolls record? The title track is on their site/myspace and it sounds puh-retty good.

Let's see how it all plays out this sabbath then. I used to be indecisive and well, still am.

Before I head for the kitchen, there's another JD King yarn on the go at his web hangout.
Posted by Lindsay Hutton at 7:34 AM No comments:
Newer Posts Older Posts Home
Subscribe to: Posts (Atom)