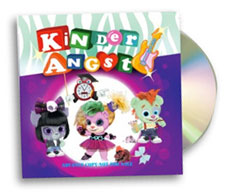 Ostensibly a kid’s record, there’s more punk rock spirit swilling about the KinderAngst rumpus room than you’ll find on most albums of that actual persuasion right now. Or perhaps pigeonhole would be more apt.

The idea is that this will provide some top beat for your brat(s). Something that will ideally extricate young minds from the cesspit of talent(less) shows and the general malaise that haunts the mainstream. There could be no better role models for a mutiny agin the mundane than Ms Palmyra Delran and her compadre Rachelle Garniez.

Kicking off with “Alphabet City”, this is old school NY punk pop action the way it was before the lower east side got all Disney-fied. The absolute highpoint is “Rat” with Palmyra’s enunciation of “huh?” during “Let’s Play” running that a close second. It's so her I can't even begin to explain. One of these days the purported meet between Ms P and Amy Allison will take place and then we'll be in real trouble.

Debbie Harry guests on one song ("Do It Yourself") so that should help the profile but someone should be working this up into a series. This is a savvy set of songs for children of all ages and a franchise begging to happen. This market is very sophisticated these days and there’s actually hope that in a couple of generations time, O*e Dire*tion will end up in a war crimes court for their filching of the Ramones T-shirt design. As sacrilege goes – I applaud the idea but never has an institution been so badly misrepresented.

But these gals – their altogether fizzier brew might just jump start future generations to embrace popular music as true art and not another spreadsheet exercise. At this time on a Friday afternoon, anything is possible.
Posted by Lindsay Hutton at 4:39 PM No comments:
Newer Posts Older Posts Home
Subscribe to: Posts (Atom)