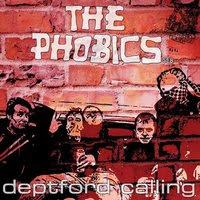 Some considerable time prior to punk rock being co-opted into the mainstream, it embodied an attitude and sense of worth. There was no software that could transform any old cak-handed twaddle into something worth listening to. My old mucker, Tom Phobic and I fought in the trenches of the punk rock wars and although we should rightly be looking at retirement with a nice pair of slippers each and a reasonable standard of upkeep, we’re really a bit like those individuals that were never informed that the war was over. Actually this one isn’t though so there’s a modicum of right on our side.

Anyway, that’s a long pre-amble into letting you know that The Phobics ”Deptford Calling” is now out and about. It contains 12 short, sharp kicks up the jacksy in the manner to that which you have come to expect from this fine Lahndunn combo. As honest as the day at your place of employment is long.

As always they combine the finer aspects of both US and UK varieties to arrive at something called “rock’n’roll”. Of the type that has no sell by date. Sadly you probably won’t read about how great this band is in the pages of Mojo but take it from me, they kick a sight more bottom than many of those who will be damned with some degree of praise.

This blighter is also available as a limited vinyl pressing so don’t muck about if you want one of those. No frills, even less nonsense noise of this type is to be nurtured, who knows, it could even kick something off.
Posted by Lindsay Hutton at 6:53 PM 1 comment:
Newer Posts Older Posts Home
Subscribe to: Posts (Atom)