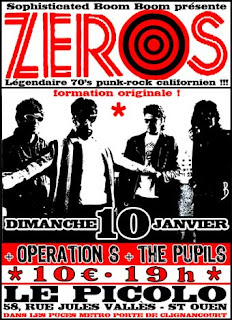 A peculiar day thus far and something I didn’t exactly see coming when heading out the door this AM. Coerced into taking an extended seasonal break means that as of Friday, I’m off until January 5th. Not in itself a bad thing because if things really go tits up in 2010 then that can just be dealt with as and when. It’s an ill wind that blows nobody any good as we’re inclined to say hereabouts.

Also I believe there's been some jiggery pokery with the e-mail also so If you've had stuff "bounce" then please try again. According to the status page its still goosed but there has been a small dribble of messages. Who knows...

Anyway coming up in this thing billed as 2010 - The Zeros will be hitting up Europe, anybody direct me to someplace that all the shows are listed?
Posted by Lindsay Hutton at 5:39 PM 2 comments:
Newer Posts Older Posts Home
Subscribe to: Posts (Atom)