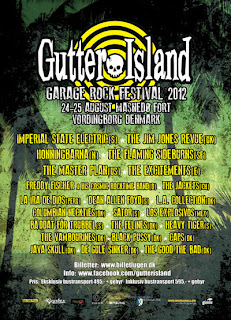 The Master Plan are hitting up Scandinavia this coming week...

Go say howdy if you can!
Posted by Lindsay Hutton at 5:48 PM No comments:

Posted by Lindsay Hutton at 10:13 AM No comments:

Of course the PR girls should be freed. There's no argument about that. Do I want to hear their "music"? Personally no. The conspiracy theory that Vlad took further hump when McCartney stuck his neb in are as yet unconfirmed. The Pooty Riot saga seems destined to run for a bit yet but it got me wondering, despite all the "publicity" - could they sell tickets? Or records, even downloads? Likely not.

They should be freed with the understanding that most people would run a mile from their "sound". That doesn't mean that it's aheard of it's time or groundbreaking. It's not. At best it's an extension of that DIY, lofi racket that never did anything for me irrespective of who it was by or how spirited others found it.

It's all high profile for Amnesty. The girls and what they did has really set the heather alight. maybe it'll result in a new movement where kids form bands or become interested in kicking agin the bullshit that we're all mired in. That's the best result that could come from all this. Inspiration. But I am sceptical. It has been cool hearing the word "pussy" on the BBC. I felt that for sure they'd get to censor that but so far not.

In America, some outlets have however decided that it might bend the minds of their citizens. All of this is further proof of why we all need to move to Madrid and just leave the rest of the world to get on with it.

So come on Vlad, be reasonable. Let the girls out. Don't be a twat.

Update - Actually, I'm not averse to this new song and it reminded me of being at Punk Kongress in Kassel where I met several Eastern Europeans who had suffered for their art. One of them even had a copy of "I Want Tae be a Punk Rocker" by Andy Cameron, possession of which could have got him gawd knows how many years in the (Colonel) Klink.

Of course, out here in the fields we bitch and whine about little or nothing. This is the nature of the beast. However, we should be prepared for this type of action closer to home. Don't take the fact that we perceive we can do what we want in the West. There are individuals working to curtail all that under the auspices that you ought to be thankful for your lot. I'm not sure that we have the collective bottle to start doing something about that but we should. I'm not and have never been of the mindset that takes stuff for granted, however much I complain or whine. So I guess what I'm saying is that Vlad is just a puppet of some higher order that's out to rain on our collective parade bigstyle. Just keep that in mind as you go about your daily business.
Posted by Lindsay Hutton at 10:06 AM No comments: