The Fleshtones will be playing at the next Primitive fest in Rotterdam...
Posted by Jeroen Vedder at 10:49 PM No comments: 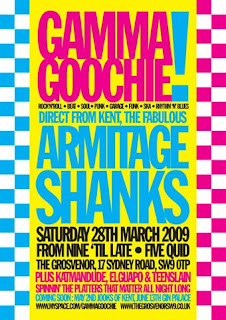 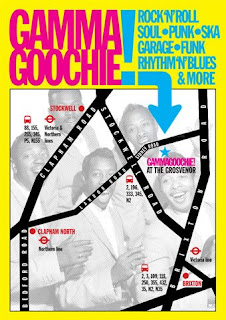 Posted by Lindsay Hutton at 3:59 PM No comments: There’s a new RJaP in town but it’s not clear yet how it’ll be made available. As you know, the dissemination of music isn’t quite the same as it once was. There almost no deals to be made with conventional labels. The emergence of this situation makes it difficult to get stuff out there in a physical sense. Cost is the biggest hurdle, second only to the problem of getting any sort of profile. How does anybody find out that anything is actually out?

In addition to this, much "published" media is cut and paste. Opinion isn’t involved. I get bombarded with unsolicited mp3’s, most of which I don’t even open. Same with cds, There’s no room or time for stuff that I reckon will waste my and your time. A little quality control, I find, goes a long way.

So, I’ve written about Robert Johnson and his instro-antics many times. It should be taken as read that the guy is a stone genius. These latest recordings go under the heading of “100% Pot Success” and are the first to feature his work with Playboy-Marse. A seriously groovetastic bucketful of tunes, this is a two man crew with an ability to score imaginary movies like it used to take an entire orchestra. Throw in essence of Carpenter, Lynch/Badalamenti and Cluster and you’re beginning to sniff at the sonic sculptures the two have created. With titles such as “Good To See You Too Roky” (not to be construed as good to see U2, not funny in textspeak or otherwise) and “Don’t Touch That Dial Or I’ll Mangle Ya!!!” – what the hell’’s not to love. “Bollocks to Your Picnic Chit Chat” is a foray into Revl9n terrain with a full electronica assault. I think my favourite at this point is “Dub for Mrs Seigner”.

Word is that RJaP will appear in Stockholm with Bob Hund and Pascal in early May. That’ll be a hell of a night. Table cleared with the black straight into the top pocket everytime, RJaP delivers only premium rib rock action. Go here, hear ‘em for yourself.
Posted by Lindsay Hutton at 1:08 PM No comments:
The multi-talented and fellow Car 54 nut, Sam Elwitt in in two great (new to me) groups...

The Underthings and The Moto-Gators (Who I see the great Greendolfy had already discovered!)
Posted by Lindsay Hutton at 12:33 PM No comments: 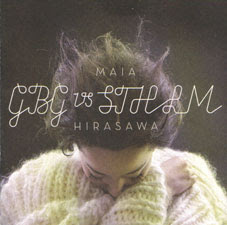 Maia Hirasawa’s “Gbg vs Sthlm” (Gothenburg versus Stockholm) builds on the foundations of “Though I’m Just Me” and it contains a song by that title just to underline that sense of continuity. “GvS” is a plush, grand sounding affair that both retains and builds upon the pop simplicity of her debut.

A very charismatic lady, I recall when HS played in Glasgow you could hear a pin drop during her opening set. This time out, the controls are set somewhere between Jonathan Richman and Regina Spektor but in reality she’s unlike either. Something about these songs make them feel like a spectacular Broadway musical score from the days when those things weren’t run by accountants.

Architecturally, it feels decidedly Scandanavian. There’s no clutter. A natural sense of space creates a minimal, spare feel. If you could breathe air this pure then I imagine, you’d never need to detox again.

An orchestral fragility like this can only come from a big heart and the necessary soul of a real artist. Not a theatre school wannabe that’s being groomed for limited pop stardom in these zip attention span times. Maia has a truly fresh design on pop music and “The Wrong Way” will warm the cockles of the most cynical heart. The quiet grace of this music commands attention. Something wistful like “I Will Sing For You” is almost Cole Porter in that it belongs to another, altogether more tranquil dimension. Maia won’t elbow her way into your life and she won’t crash your party but she’ll be there to soothe your earbones long after much of the alleged big guns have boarded up the shutters and moved on.

Already a big star in Sweden, one day Ms Hirasawa will make a sizeable dent everywhere else too. It might not be tomorrow or even next month but however long it takes, the world will be a better place for it. Meanwhile, I hope that she and Jesper and their crew will come out this way soon, it’s been way too long.

Listen to the album here, it’s out on Razzia this coming Wednesday.
Posted by Lindsay Hutton at 11:09 AM No comments:
Sunday morning has come down again. I thought that the clocks changed this weekend but that carry on is seven days away. Just futzing about, I’m listening to the Richard Holloway thing again and this week he has Margaret Bennett on, another very good programme. He has real people on there, what an idea. Not people with an axe to grind or something to sell. Just amazing stories of rich lives to share. I wish this could catch on.

I’m eternally surprised at peoples ability to keep all the facebook stuff going. Finding stuff and actually putting it on there continually. I don’t like the new layout either but I don’t have the energy to campaign agin it. And even if I did, it wouldn’t do any good. FB continues to turn up old buddies from my own chequered past though so that’s a good thing methinks.

I have to go out for a wee while now. See youse later.
Posted by Lindsay Hutton at 8:59 AM 3 comments:
RIP - Eddie Bo

(link via Gavin Martin on Facebook) - Song runs for approx 2 and a half minutes...
Posted by Lindsay Hutton at 7:19 AM No comments:
Newer Posts Older Posts Home
Subscribe to: Posts (Atom)