It’s a dismal looking day outside. Still I’ve been determined to catch “Alice In Wonderland” at the cuppa showing since I saw it in the programme. I’m curious as to just how Mark Ryden it all is. That’s no convoluted rhyming slang by the way. The price has gone up by 5 bob since my last visit but you can’t really whack a film, a coffee and a cake for £5.25 at the real cool time of 11am.

I really like an early schlep to the cinema because the pond life doesn’t stir until later. Fingers crossed that the “poor weather conditions” will send any such individuals and their troupes in the direction of the malls or anywhere else. Few things to run by you, incase you find yourself on the computer grazing for stuff to pass the time.

I posted this NBT article on facebook yesterday I think but maybe you’d like to see it if you don’t hang out on that particular branch of time-wasting.

JD King has another episode of Metaphors (#19)up. I call them episodes now because it’s like a cool literary TV show. Cinematic with just the one picture. Just in... Ep 20. 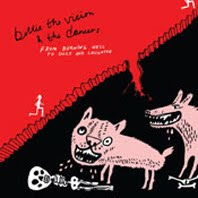 Pictures of Margaret DollRod from Paris last week. Lucky so and so, Brother Patrick had a version of “Psycho” dedicated to him at this very shindig by this very bombshell.

And news of the imminent new album by Billie The Vision and the Dancers.