“This is Jonna Lee” is the second album from this Scandanavian chanteuse. Continuing the stream of unstoppable quality pop from the Razzia hit factory. Check out “My High”. It’s like what mighta happened if Carole King had written “I’m Waitin’ For The Man”. In terms of melodramatic popular song, they don’t come much more sophisticated than these. It’s not high octane but more slow burn.

The kind of thing that you’ll casually overhear and wonder what the heck it is like an itch. This will eventually turn into a rash as the songs wash over you. There’s an understated swing to the undertow of “Newfound Friend” that’s way cooler than any Aimee Mann song I ever heard. “The Light” appeared late last year on the “This War” EP. It sounds like it’s been a bit buffed up from that outing.

The quiet assuredness works in a way that bludgeoning never could. Jonna and her crew have fashioned a wee gem that will surely infiltrate the hearing gear of anyone with ears. Be nice to see and hear how it works in a live setting, hopefully the UK will get a chance to do so in the not too distant future.

It’s been very remiss of me not to write about the “Lola Dutronic in Berlin” album before this. I’ve had it for a while and have played a lot. Their mix of varying electronica tempos and French pop is pretty damned exquisite. Again it’s not something that might grab you straight away. I’m a sucker for their craft and have seen people dismiss them and then come back to ask what that was again.

So, irrespective of whether it’s love at first listen or something that might grow, LD are in command of a quality product. The narrative of “Brigitte Bardot” is something I could just listen to over and over. When I folded and bought a cd player way back whenever, I kidded myself to think that I might listen to more jazz. That never happened but just lately, because of music like this I’ve taken to the highways and byeways of this kind of cinematic synth pop. 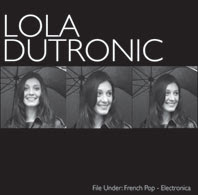 Not quite dance music but something that evokes time and space, irrespective of the place. This deserves to sell in Pet Shop Boys-sized truckloads. I remember once seeing The Pastels and Stereolab. Bob Stanley was playing records (or djing as the youngsters call it). The whole vibe was just indescribable, a happening in my heid at least. This album reminds me of that experience. They even roped in ex-Martian Spider, Mike Garson. Lola D combine these beats and offbeat orchestration to create an infectious exotica that could well be the soundtrack to an impromptu journey out of this world. That’s a rocket I could do with getting on board a lot more often. File under: Dutronica.
Posted by Lindsay Hutton at 5:21 PM 2 comments: 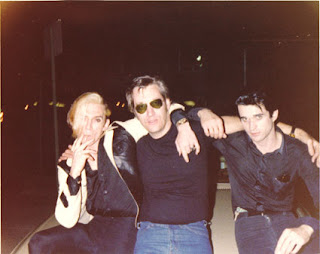 Bryan Gregory, Tex Rubinowitz and Nick Knox (can't recall location, I think I got it with a TR presskit) if anybody knows, or knows who took it - please pipe up!
Posted by Lindsay Hutton at 5:03 PM No comments: 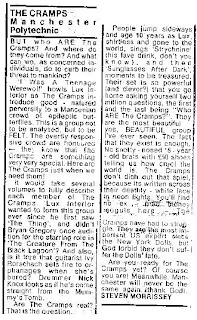 Steven Morrissey on The Cramps for Record Mirror

Click on the image to enlarge. That way you should be able to read it. Sorry about the guff quality...
Posted by Lindsay Hutton at 11:35 AM 1 comment:
I'm not convinced the e-mail breach has been addressed to my satisfaction so I've torn hotmail an additional one. I was already in a foul mood so it was kinda full throttle. Anyway, the general demeanor has been lifted further after I watched this...