That’s April on the way out, seems like I spent the whole month chasing my tail. When I come home at night and at weekends, I figure that it might be possible to put this thing back on track. However, then something happens and particularly after a hospital visit – my soul gets sucked right out of my skull. Generally leading to passing out for a couple of hours to the extent of crashing any logical sleep pattern. It’s wearing me down and despite half-arsed attempts to rectify this I still awaken at 2.18am or thereabouts and maybe one or two other times before the eventual 6am struggle.

I’m not complaining, just stating facts. Writing, or typing, anything right now is problematic. It’s all about being tense and nervous and you know what that leads to according to David Byrne. Christ, I haven’t even put together the skinny on the recent visit by Sir David Alvin during which I bunked off to Newcastle.

Have to say that record store day 2012 ripped my knitting. It was the year this previously community oriented, old school celebration well and truly jumped the shark. Individual horror stories notwithstanding – it’s cool that the shops benefit but the aspect of queues of greedy bastards loading up to reset on evil-bay (thanks to Tom Morton for that one) those with no proximity so such a joint get shaken down.

So from here on in I’m giving it the body swerve. It’s dead to me having become the latest in the long list of casualties that started out as a good idea only to be hijacked by greed. What should be something that casts the net wider has ended up being a bun fight for scumbags to get their sweaty mitts on a bunch of swag. 99% of which isn’t worth having anyway being that the arse has been cawed out of it due to continual format abuse. Life is too short and filled with way too much stuff as it is so thanks but no thanks you thieving bastards. I’ve woken up and smelled the coffee.

Posted by Lindsay Hutton at 9:55 PM No comments: 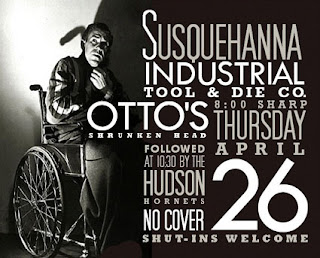 Shut-ins welcome. As always. It's a Susquehanna Industrial Tool & Die Co. Thursday this week at Otto's, with the sharpest hillbilly trio on five legs!