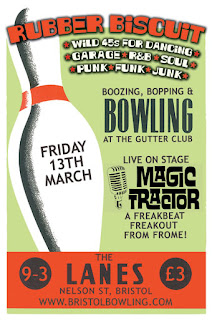 So come quaff from a selection of reasonably-priced Euro biers, sling some classic bowling alley vittles down yer necks, rave to the band, make like a kingpin, and dance yer asses off!

See ya at the bar? Selah! 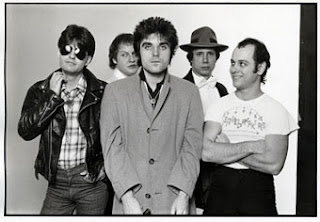 For the first time in 15 years, since the release of “We Want Everything”, the Nervebreakers will perform live. Only three shows are scheduled.

Nervebreakers are a late seventies/early eighties Texas punk band considered by many to be the first of their kind in the southwest. Like many others of this genre, they started out as a high school garage band doing sixties / early seventies cover songs. What made them unique was their range of material; from the music of the English Invasion to Yummy Yummy bubble gum as well as songs from punk pioneers MC5 to true blue country artists like George Jones.

The array of influence from all those cover songs melded into a two guitar, bass and drum sonic assault with a wild child vocalist up front. The members of the band began writing some of their own songs. All aspects were in place and the band was primed when the punk movement broke in the mid-seventies. On July 24, 1977 the Ramones first blitzkrieged Dallas' Electric Ballroom and Nervebreakers opened. In 1978 the Sex Pistols set out to swindle America but it was Nervebreakers who stole the show at The Longhorn Ballroom. In 1979 when the Clash were calling here at Dallas’ Palladium, Nervebreakers let them know they weren’t in London anymore. By 1980 when the Police came to town, they were Nervebreakers fans due to Random Notes in Rolling Stone. The list reads on and on in NME, Melody Maker and High Times. Like a who’s who of punk rock history, our guys held their own as the Texas band to see. Nervebreakers weren’t just playing, they were the real deal. Home grown - born and raised. Texas proud and ready to kill.

They introduced punk rock with a bit of a ‘twang’ to the world and recorded it for all to hear. In the pre - D.I.Y. days of 1978 they self-released the EP “Politics” featuring “My Girlfriend is a Rock”. ”Girlfriend” became a hit in San Francisco, Sacramento and Boston and was later covered by the Angry Samoans and Wool - among others. This song (and the US invasion of Iraq) inspired sixteen year old punk upstarts, Spector 45, to put their spin on the song as “My Girlfriend’s in Iraq” in 2003. Other 7 inch gems that followed include “Hijack the Radio” b/w “Why Am I So Flipped” The black and blue vinyl “Girls, Girls, Girls, Girls, Girls” b/w a cover of the obscure Rolling Stones song “I’d much Rather be with the Boys”. The band also contributed two songs “So Sorry” (as the Barry Kooda Combo) and “I Love Your Neurosis” to the local punk rock compilation “Are We Too Late for the Trend” put out by ESR.

Other acts featured on this late seventies Dallas area time capsule include the Telefones, The Vomit Pigs, The Skuds and Superman’s Girlfriend. Despite being recognized as the biggest and baddest of them all locally, they were also huge fans of Texas predecessors such as the 13th Floor Elevators. This eventually led to the band contacting Psychedelic rock pioneer Roky Erickson. Roky had just walked out of a mental institution so they offered to open shows for him and provide the legendary musician with a backup group. The result helped Roky back in the public eye. And “Roky Erickson and the Nervebreakers Live at the Palladium in 1979” was issued on the French label New Rose Records.

In 1980, Nervebreakers took on their biggest endeavor yet, recording the full length album “We Want Everything”. Sadly due to band finances this effort was not to be released. Side projects and individual interest whittled away at the band until an eventual demise. Each and every off shoot of the band has been and continues to be incredible. Vocalist Thom "Tex" Edwards has fronted bands including “The Swingin’ Cornflake Killers”, “The Loafin ' Hyenas” and most recently “Out on Parole”. Lead guitarist, Mike Haskins, has led the instrumental spaghetti western band “The Big Guns” for the last decade. And guitarist Barry Kooda had a great run with late 80's band “Yeah Yeah Yeah” and as one of three front men in the 1990's country outfit “The Cartwrights”. But those are all other long stories so for now let’s just stick with Nervebreakers. “We Want Everything” did not see the light of day until 1994 when Texas rarities/reissue label ‘Existential Vacuum’ released it to rave reviews.

This was followed by a single reuniting of the band for a release party at Trees in Deep Ellum. Shortly thereafter this effort was picked up by garage/punk label ‘Get Hip Records’ and made available worldwide. In 2000 Italian label, “Rave Up Records” woke up and released “Hijack the Radio” a collection of singles, rarities and live cuts. Years after they laid the groundwork for thousands of other Texas bands, Nervebreakers were finally getting their due. Which brings us, folks; to 2009. After serving your punk rock needs for over thirty years the Nervebreakers have reunited.

All five core members have returned including vocalist Thomas "T. TEX" Edwards, lead guitarist Mike Haskins, rhythm guitarist Barry "KOODA" Huebner, Bob "WILDMAN" Childress on bass and drummer Carl Edmund Giesecke.. An anthology "Why Am I So Flipped?” of previously unreleased on CD songs has been assembled and a brand new effort of never recorded before material entitled “Face Up to Reality” has been taken into the studio and captured as well. Why now? Unlike most of their contemporaries they are all still alive. So there is an opportunity to re-emerge. The roots of the band and the music have finally brought things full circle. Prepare yourself because the best is yet to come.

(Thanks to Tex for the heads-up)

Posted by Lindsay Hutton at 6:06 PM 4 comments:
Feel like I've been living in a bubble for the past week(ish). Came up for air and see that the reaper (that's hear not fear) has been up to his or her old tricks again. It's not necessarily a guy, right? Equal opporchancities and all that... So we bid a fond farewell to these folks.