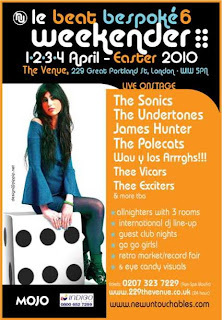 The Rev. Martin Percival sent in this info on this year's Le Beat Bespoke .
There's a lot of hot tickets around kids. Which scene are you gonna make?
I can't make 'em all however much I wants to.

Posted by Lindsay Hutton at 6:51 PM No comments:

I think I’ve shaken off the lurghi now and hope that this little tussle will have built up my resistance to these bullshit germs for the remainder of “the 2010”.

There’s a lot of stuff to be dragged through the neighbourhood over the next wee whiley (lapsed into an approximation of the Doric there). Always seems like there’s all the time in the world during the course of the day but by the time night falls, I’m much less in the mood. That’s why I try to update this schlamozzle (sp?) in the morning more often than not. It’s a routine that’s been a bit stop-starty of late.

Still, don’t think that I’m pissing about doing nothing. There are activities and things going on despite it not being trumpeted on here. If I keep rehearsing that line then I’ll begin to believe it masel’.

Great to hear that you folks are digging The Legendary Tigerman. Watch out for a Munster vinyl edition of “Femina” coming soon. Sticking with serious talent from out Portugal way, I do believe that Ms Rita Redshoes is currently working on the follow up to the momentous “Golden Era”.

Hot off the proverbial shovel... For one real cool night only… Friday March 5th 2010…

A special Gearclub event to celebrate the release of A Real Cool Time Revisited.

An all-star garage rock revue will take place at Debaser Slussen in the fine city of Stockholm.

The shindig will include members of The Nomads, The Creeps, The Backdoor Men, The Wayward Souls, The BottleUps, Shoutless, The Stomachmouths, The Wylde Mammoths, Crimson Shadows, Maryland Cookies and The Slammers.

Who knows, with this scale of combustion – anything could happen?
Posted by Lindsay Hutton at 6:40 PM No comments:
Newer Posts Older Posts Home
Subscribe to: Posts (Atom)