Oh yeah, I know what I forgot. Saw Planet Terror and thought it was a hoot. A lot of love and obsession went into that for sure. Don't understand why it got panned at all. One gripe is that the jumping and faux print quality is a bit of a pain but other than that. I'd like to see it be turned into a series. Really. Also, as I consider how to tackle this pile of stuff to share with you, I'm listening to the soothing strains of Home Blitz. Have you heard "Hey!"? Well you need to but it's not on their page, "Stupid Street" is though. This furthermore confuzzles me as to what year it is. More about that later though, meanwhile check this out, the fatties are gonna make the earth spin off its axis, that's the subtext, right? Is it April 1st? I just don't know anymore. maybe it's a peculiar dream. If it is then I must attempt to find out what I ate that brought it on. One thing is for sure, news ain't what it used to be.
Posted by Lindsay Hutton at 12:18 PM No comments: 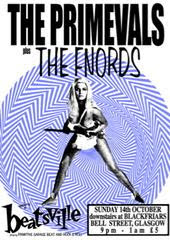 So yeah, the ancient one made it. Stayed up after midnight and caught some fine r*ck action in the process. The Beatsville scene was made and The Thanes took the stage to limber up for their forthcoming nuptials with The Sonics in NY. The spirit with which Lenny and his crew crank it out is as pure as this stuff gets. There's a casual gleam about these nuggets and a vast trove to draw on. There's something poet-ic about how fate has delivered them to this position. Lenny Helsing has been a rock'n'roll evangelist for way to long to be able to do anything about his condition. He's made his bed and he'll have to shake, rattle and roll in it. Not with it.

And The Primevals returned to the East Coast after more years than any of us might care to remember. They're just about to drop a great new album and this set proved that they've still got it in spades. The Rotterdam Rumbles of this world would do well to consider them for their next jolly. They never sounded like they were from Glasgow and it sounded even less like it tonight. Mixing it up with new and old. Present and correctamundo. There's a gig at Blackfriars tonight so if you can then get down there. Full details on the album and where to get it will be coming at you right here soon. I'm perfectly willing to agent the supply of this fine music to those who need it. And to top of the set, they delivered a smoking version of "Screamin' Skull". A version of which will appear on the upcoming Dirty Water Fleshtones tribute release. It was also mooted that this woulkd be available from Larsen on vinyl. Have to investigate that.

And to cap off a perfect, if disorienting evening, there's the news that Suzi Y Los Quattro are about to go into the studio to fashion a chunk of rock'n'roll that will be stopping traffic in due course. All is well in this corner of the universe. For now at least....
Posted by Lindsay Hutton at 11:01 AM No comments:
Newer Posts Older Posts Home
Subscribe to: Posts (Atom)