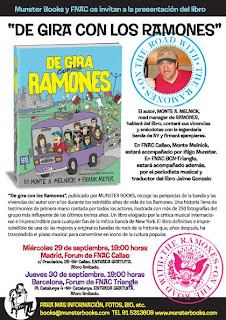 Monte Melnick is heading for Madrid (FNAC Chain Store - 29th September) and Barcelona (FNAC Triangle - 30th September). You kids out there need to go meet this great man and buy the Jaime Gonzalo translated special edition of "On The Road With The Ramones". It couldn't have happened without this guy. Just out on the Munster Books imprint!
(click on the image to enlarge in new window)

Time is fleeting and Amy will be pretty much back in that New York groove by the time I post this. At this point we’ll back up to Saturday night and the BMX show in Glasgow. The Classic Grand is the sharpest venue in town and apart from the seemingly Draconian curfew, it’s a great place to watch music. We missed Randolph’s Leap but got there in time to see Primary 5, a big favourite of Mr Tjolsen of the Oslo parish who was also out this way last week. They make a decent racket and have all the dynamics but the constant tuning didn’t half hamper the momentum. Still, this is the problem with entertainment. The Bandits have regrouped since I last saw them and I imagine that demand elsewhere for St Deluxe makes this a good move. In contrast to the P5 maybe playing a tad too long, the BMX crew could have done with playing a wee bit longer. The newly shorn Duglas is no Samson. He was in top form as was the band.

Sunday was pretty quiet, caught “Genevieve” at the Hippodrome and became depressed at the consideration of having burned a week’s leave in what seemed like an instant. Amy and Davie completed the recordings and now things need to be assembled. Expect a bloody fine album over the course of 2010. Details will emerge over the coming weeks and months and you’ll be able to follow it all here provided I’m around for that long.

Talking of people not being around, it was a bummer to hear about Jim Carroll yesterday. I met him once at the Great American music hall in SF where he did a show with Lenny Kaye. Angel CC and me. I’m thinking maybe 1994 but neither of us can remember when exactly it was so it must have been a good night… We went to a metal club called Terminator with Lenny and I’m pretty sure that the band was Testament. I recall it being like the club scene from The Crow and that we laughed a lot but that’s all the neurons will permit at this time. With regard to JC, my jukebox ate my “People Who Died” 45 and was immediately put out of commission as it has been to this day because I can’t find anyone who might be able to fix it. That’s something I need to attend to. Figure out if it can indeed be restored to working order or get it out of the bunker. I’m really hoping it’ll be the former.

Then I find out today that Patrick Swayze and Keith Floyd have died and I’m not sure either warrants the standard RIP here because neither made much of a mark. I will admit that I don’t mind “Roadhouse” at all as a film but can’t recall seeing either “Dirty Dancing” or “Ghost”. “DD” however took Mickey and Sylvia’s “Love is Strange” to the mainstream so that’s pretty cool. Keith Floyd is being blamed for the advent of the “celebrity chef” in the media today but he seemed fairly amiable compared to an utter tosspot like Gordon Ramsey. I don’t think his memory deserves to be sullied like that.

And that kind of brings us up to the present, there’s all kinds of catching up to be done. I did consider nipping along to see this new “Taking Of Pelham 123” tonight but I think my time would be better spent restoring a semblance of order to the bunker. But not before I turn that godawful "request" show that's taken root on Radio Scotland between 6 and 8pm.

Congrats to Matt and Kim winning a VMA award for "Lessons Learned". If it was down to me they'd have won all of them. And given Kanye a good pummelling into the bargain.

OK, stuff do do. Lot of music to process and information to figure, not to mention e-mails with links to stuff that I'll never hear to delete. Am I sure I want to send it to the recycle bin? You bet.
Posted by Lindsay Hutton at 5:59 PM No comments:
Newer Posts Older Posts Home
Subscribe to: Posts (Atom)