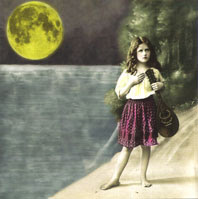 First Aid Kit’s “The Big Black and The Blue” has getting pretty decent licks in the press since it came out a couple of weeks ago. Apparently a stooshy came about when these two sisters covered a Fleet Foxes song. One of those internet phenomenon deals we keep hearing about. Let me just state hear and now that I don’t see what the fuss is about with those beardy guys. This is an altogether different kettle of fish, particularly after you get over the baroque nature of the harmonies.

These two young Swedish sisters have made the record that Gillian Welch fans should search out ahead of their heroine making another album. The Appalachian nature of this displaced duo is uncanny. Klara and Johanna Söderberg are the offspring of Lolita Pop man Benkt Söderberg so they have an excellent musical pedigree. This is their first album and I think Witchita have as close as there can be to having a hit on their hands. “Ghost Town” is amazing and no, it’s not a cover of The bloody Specials. It’s a plaintive hymn hot a million miles from something wir ain Ms Laura Cantrell might have come up with. “Winter Is All Over You” and “I Met Up With The King” along with “Hard Believer” al emerge as songs that have elements of excellent acoustic pop in addition to being chestnuts of isolated folk.

First Aid Kit will be playing in the UK from next Friday night. Catch them now before the heather ignites. 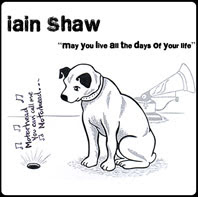 Anybody that can even come up with the idea of recording covers of Calum Kennedy, The Ramones and The Damned far less pull it off has to be on to something. You might recall being hepped to Mr Shaw’s “Blitzkrieg Bop” somewhere back yonder? Well, he’s brought his unique twist on acoustic routes through this special “covers” album. It’s free and available from the man himself ahead of his first proper set of self-penned material.


His version of Uncle Tupelo’s “Gun” underlines his ability to strip back and apply an altogether mood to songs that you may consider impossible to consider in any way but the original form. Maybe it’s a symptom of being a Lewis native that has forged his unique ability? Being isolated from the mainland and soaking in all manner of influences. Like the way the Australia interpreted The Stooges and sold them coals back to “Newcastle”. One thing’s for sure, you haven’t heard Franz’s “Take Me Out” performed like it is here.


Iain Shaw’s populist outsider folk is headed for the mainstream pulsebeat, infectious in its simplicity and utterly charming. You need to hear it to believe.
Posted by Lindsay Hutton at 4:08 PM No comments: 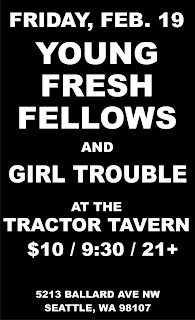 This is the way a show should be planned. Two great bands, together. Promoters, take a good look at this and take a leaf out of this book willya? It's not likely that such a practice could ever happen hear but one lives in misguided hope.
Posted by Lindsay Hutton at 8:00 AM 2 comments: