Been a bit light on the blog posts over the past week, it’s sort of like a diet. I’m pretty sure you could all use a break from my yattering. Hell, I could use a break from my yattering. Still, a couple or three visitors have noticed that the frequency dropped. That says something about them and also about me but if I get my act together, and take care of the chores, then there might be time to shoot the shizboobah over the course of today.

I saw two of these “touted” bands on TV – The National and Yeasayer. I’d clocked the names and saw the ravings but had never heard (or seen) either. Needless to say I was less than impressed and if those are the future then I want no part of it. There were no redeeming features and I actually had to turn off the TV. What with those and the constipated angst of The Hold Steady, no wonder the kids would rather fouter about with flippin’ video games. There is obviously an appetite for acts that just regurgitate past moods with no soul. It’s like lego music, made outta wee building blocks. Like airbrushed pixels.

You can approximate all you want but that will never ever hold a candle to music like you’ll find on these here releases... 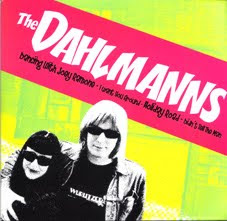 The Dahlmanns debut EP on Pop Detective is just out. It kicks in with a versh of Amy Rigby’s “Dancing With Joey Ramone” and adds that patented Norwegian bubblegum gusto. The 4 songs here run for exactly the length of time that it takes me to drive from here to the car park in Bo’ness. 9 minutes and 42 seconds. I remember the first time I heard the song. It was in Laurie’s Bar in Glasgow when Amy was here with Hazel and the two of them stormed “Domino”. Anyway, Amy had not long written “Joey” and I don’t mind telling you that it choked me right there and then. Subsequently, every time I hear it or play it – I think to myself how it perfectly captures the guy who was our Elvis. It was quite a thrill then to get acquainted with André and Line in Spain last October. When I spun the song at the Wurlitzer, Line told me that they wanted to do the song and they have. They’ve done it justice too.

“I Want You Around” isn’t the Ramones song but it’s a belter. “Holiday Road” is a powerpoppin’ revup of the Lindsey Buckingham song and The Hitmen’s “Didn’t Tell The Man” rounds things off perfectly. Leaving you with bated breath for the album that is coming sometime in the latter part of the year. These kids get it. In addition they’ve got it. And you better grab this while you can. A 7” will be available soon but I’m not sure that it’ll include all these songs so maybe better grab both. Safety copies of great singles should always be considered as an option. 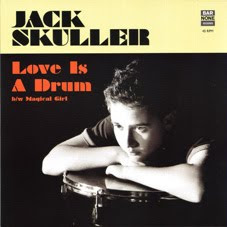 Jack Skuller’s “Love Is A Drum” (BarNone) is a hopped up Marshall Crenshaw-like heck of a debut for a real teenager. It has a nice Knack type crunch to it. You think of kids these days being all about that hippity hop music or whatever but this one seems to have a beat on what makes a short, snappy pop chestnut. This was produced by Daniel Rey, who also plays guitar and bass on it - under any reasonable circumstance – this kid ought to have a big future ahead. The only obstacle as I can see it is that he appears to have actual talent. Ex Fuzztone/Nada Surf (did they split?) man Ira Elliot is on drums. Cheers Daniel. 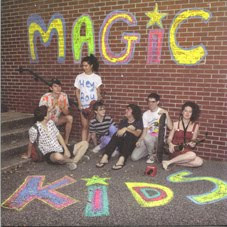 And around the same age, I finally got a copy of the Magic Kids 45 from Brother Joss. He picked it up on a recent jaunt to Memphis. Several of you will already be familiar with it but on the off chance you’re not and you still have a thing for Spector-esque, Beach Boys abandon then this is entirely your bag. “Hey Boy” sounds like it was made in Bellshill or East Kilbride. That part of Scotland was secretly twinned with Memphis some time ago. You weren’t aware of that?