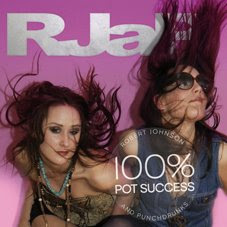 I know we're getting a little ahead of ourselves here but the RJaP latest is out on August 18th and with Rob being a modern kind of chap, it's a download deal. OK, so it's one of those "seize the day" situations. It's early but things need to get done. Of course there's plenty of time for my dominant lollygadding gene to kick in but we'll see. I heard that La Roux bint in the wireless and recalled that Danny La Rue died last week also, another RIP then. The much hyped singer of the similar name is like Maddy Prior goes Gazza Numan. Sort of irritating but infectious at the same time.

Not sure where today's journey will take me. The only (almost) certainty is to nip along the road to see "Gun Crazy" this afternoon. Partly because I've missed several other showings and also because I'm curious as to how many people will go to see that in Bo'ness on a Saturday afternoon. Quite the social experiment and better for you than languishing in the pub.
Posted by Lindsay Hutton at 6:47 AM No comments:
Newer Posts Older Posts Home
Subscribe to: Posts (Atom)