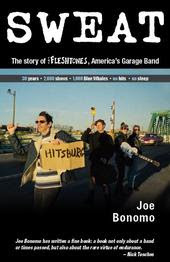 Coming this fall. The solution to all your gift problems...
Posted by Lindsay Hutton at 3:24 PM 1 comment:
Been fast-forwarding through the TV highlights of Glastonbury in the past couple of hours. Did the same yesterday. If it's any consolation, I went out in the torrential rain and got soaked. walked through the park, got a little mud-spatter going that type of thing. Not the same as head to toe but sod that for a game of soldiers...

Anyways, I liked the clips of Lily Allen and also Amy Winehouse. They're proper pop stars. The Stooges stage invasion and after show appearance was entertaining. Ron Asheton was resplendent in his wellies and Iggy never got his willy out. Result. Plus they never showed any of the turgid new material on BBC2. John Fogerty was great and it made me think again about how he really should do "Starry Eyes". Check out this vintage Iggy and co action from Missouri via The I-94 Bar.

On the "what the chuff was that about" side of the coin, The Killers lived up to their name by boring me rigid. Lord knows how long it must have felt like if you didn't have a FF facility. The Klaxons - kings of "new rave"... dearie, dearie me and so it goes on. I saw one song by The Hold Steady which just underlined what I already figured and that singer really needs to vary the incredibly irritating mugging. Saw billboards in Camden for The Pigeon Detectives and am inclined to make gloating observations about droppings but I imagine that a Kaiser Chiefs understudy is not a high priority for the remainder of the UK. But who knows. Nick Lowe was on, that was good, then they started to show the sodding Killers again and to avoid a Bill Grundy type situation, I opted for the off button. From here I'm going to tackle some listening and reading that various chores have kept me from.

I'd much rather be doing what I was doing last Sunday at this time but you know what they reckon about too muckle of a good thing. I should add that "Seven Ages of Dork" wasn't too bad last night, still all over the place but liberty taking was minimal. Maybe the wine was chilling me out?
Posted by Lindsay Hutton at 2:33 PM No comments:
Newer Posts Older Posts Home
Subscribe to: Posts (Atom)