While Lindsay is busy tryin' to come up with some explanation in regards to his bikini eating habbits, I figured I'd pass on a couple of amusin' things that were forwarded to me in the past few days.
First off is the picture below, taken by my pal Jos at the local "rock café", displayin' the effects those R2D2 type DJs have on common knowledge... 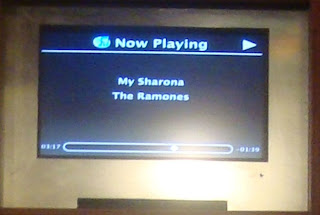 For some serious weirdness tho', there's always Tony Slug's Youtube suggestions: Here's some Mexican Metal for ya, and, I kid thee not, Christian Ska...
Posted by Jeroen Vedder at 10:17 PM No comments:
I’ve done more than 2500 rock’n’roll miles since last Monday and feel a wee bitty worse for wear but all for a great cause. It was supreme and obviously nothing good ever lasts but it does have a way of searing into your soul. As send offs go, it can’t get much better than seeing Ronnie Spector. While there were points that her voice was undeniably flat there were others where it rang out pretty much like you dreamed it would. The band provides a safety net of being able to recreate the mood and sometimes even the sound. This isn’t easy in a place like The Arches where I’ve seldom heard the room sound much better.

The great and good and even the singer from Glasvegas were all there. This had been the best turnout of the very short tour and Glasgow is a spiritual home of this sound. The fact that she had Daniel Rey on guitar twinned the generations of the Ramones and her Philles compadres. It never descended into cabaret hell either. There aren’t too many icons of this status around so lets just consider that when mumping and moaning. For my money, it was as good as the Brian Wilson show I saw on his first comeback tour. Tricia Scotti is involved with The Losers Lounge group/events, Jeremy Chatzky is of wir ain lass Laura Cantrell alumnus and was also playing in Springsteen's Seeger sessions crew while Louie Appel has played with Amy Rigby, Southside Johnnny and Tom Verlaine. Wendy Ip and Danny Obadia completed this mini orchestra and although I'm not familiar with the individual careers of those folks, they made the whole thing shimmer.

So then to Spain, smooth trip out all the way to Plaça de Sants. When I got to the bus station in Barcelona, a guy asked me for instructions and it turned out he lives about 5 miles from me. My directions from my tour manager, Colonel Vidal were better than spot on. Quiet start, Suzy, Jonathan and Donna came to meet us for an aperitif or two. Lovely kids, on a punk rock mission to save the world.

Next morning, prior to Senor Vedder’s arrival, Stefan and I headed for Plaza de las Glorias some distance from our HQ. It was like a larger, expansive version of The Barra’s in Glasgow. When Jeroen arrived it was time to head into town for some record stores and ultimately to arrive at The Dictators soundcheck to make sure all was ship shape and Bristol fashion. It certainly was and what a total pleasure it was to see these guys. 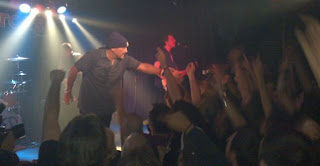 Now, I’ve written about the band many times. Most everyone knows it’s why I’m here. Now with the wonders of YouTube you can see what I’ve been known to froth at the mouth about. This is the real deal and you can prattle on with your Stooges and whatever but THIS is one of the greatest bands that ever was, is or ever shall be. And this was the first show they’d done in a long time. An unsurpassed set list and the chops to take it all to another level is a rare commodity but it really doesn’t get any better.

As HDM said all those years ago, “I don’t care who you bring on daddy”. They’re most likely going to go under the thunder wondering just what hit ‘em. Add to that the passion and fervour of a Spanish audience and you’ve got something truly life-affirming. The band's status will continue to grow through all eternity. In the unlikely event that you’re new to all this malarkey then just look at the clips. If you don’t like ‘em, them please move along. Sharpish.

I asked Andy if they’ll do it again and he’s not sure. We can only hope that they will. Gasoline shortages and all out meltdown on a global scale be damned. Andy, JP, Richard (HD), Ross and Scott, we salute you. And gracias also Pepe for making it happen.

So we were flying pretty high from there and arranged to go to Barbara Ann. This is a small but perfectly formed haunt that is a mandatory visit if you find yourself in Barcelona. Great music, top people and pictures of Girl Trouble and The Shame Idols on the walls to mention but two – how can it fail? All of a sudden it’s 2.30am and the place is closing. I paraphrase the late Joey Ramone here when I say, “What we’re leaving already?”

So Thursday was relatively quiet. Jeroen and I walked the length and breadth of the city for something like 9 hours. Record stores, the beach and some pitstops for fuel. It has to be said that I’m not big on tapas so for my next jaunt I’m going to investigate the cuisine a bit further. It’s not ideal for near-veggies that aren’t keen on rabbit food. On the way back to the digs, we chanced upon the BA again but it wasn’t opening until 11pm. Being somewhat puggled, it was best not to return but I wanted to. Make no mistake about that.

Coming soon, Part Two… I just have to check some facts and spelling. Highlights include two shows by S&LQ and a scorchio few hours in Madrid. There’s a bit about eating a bikini also, so stay tuned...