Podcasts by available for download. Also at i-Tunes, etc.

Robert Johnson and Punchdrunks “Traynor In Heaven For Link Wray” finds RJ and Per back in tow with former Nomad Ed Johnson for this rip roaring tribute. Few guitar players on earth are as qualified to interpret the great man’s work as the one and only “Solnafingret”. This blighter will shred your speakers but what the hey, you needed new ones anyway right? And don't just take my word for it!... check this out from a fellow Bambi Molesters fan - "This is one intense set! In many ways, it's more like their earlier recordings, full of tuff guitar noise and utterly intense energy. Two guitars and drums! This nod to Link Wray is superb! Manic, demented, and tortured... I love it!" Phil Dirt/Reverb Central Oct-2006 +++++

I’m not sure how long Dr Zero’s “Dirty Way” has been out but it’s on Dusan Hedl’s Subkulturni Azil label. This Slovenian trio are a no-frills punk rockin’ powerhouse that pummel out a nifty line in fast and loud entertainment of the never lose a beat kind. Gotta be digging that tub-thumping in “Whore-House Road”, a kind of low budget “Paradise By The Dashboard Light”. 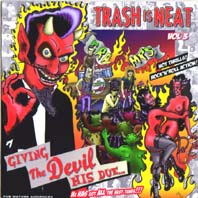 Mondosean from the Staysick webring has marked the 30th anniversary of The Cramps by compiling a double cd of covers by a global wave of bands and individuals. Including a swingin' version of "I'm Cramped" by our own Brother Patrick. This critter ain’t for sale but you can download it at www.thecramps.eu. Entitled “Trash Is Neat Vol. 3 – Giving The Devil His Due”, I think it’ll pleasantly disturb you.
Posted by Lindsay Hutton at 2:14 PM No comments: 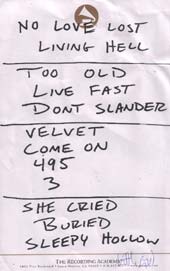 Brother Patrick has been tearing it up again... with The Lords Of Altamont!
"The night began rather badly : after being arrested by the police because I was driving too fast in town (naughty Patrick !, but they were cool and let me go with just a "slow down"), the venue said "sold out". Suddenly, here comes Jake (Cavaliere, LOA singer, when he's not roadie-ing with The Cramps). He recognized me and put me on the guest list. Thanks Jake! The show was great, high energy rock'n'roll (see set list), composed of the best songs from their albums and covers like Roky Erickson's "Don't Slander Me", "She Cried" and an instrumental version of a Joy Division song done a la Link Wray. The show ended with an apocalyptic version of The Stooges "Little Doll", with Jake clambering all over the audience and carrying the drum kit through the crowd while the drummer kept playing! I went backstage to congratulate them and to hand over a CD of their last Paris show from February along with a copy of my recording from the Halloween Cramps gig in San Francisco. Don't miss them on tour." Cheerio, Patrick
Posted by Lindsay Hutton at 1:47 PM No comments:

Christmas is thrust upon us earlier and earlier and there should be a law against that. However, stocking up on cool music that might just get you through the hard-sell bollocks without committing murder is not subject to such prohibition. As I’ve said before, I’m not particularly down with the season. It has particularly spiky reverberations for me this year but I do get a wee bit fuzzy when I hear those sleighbells and whatever.

You’re aware of Oh No It’s Christmas Vol. 1 but now I actually have a copy. Those lovely Razzia folks have curated the very thing for you. Like sonic mulled wine. ONIC kicks off with Konie mixing up a Velvet’s “Waiting For The man” kinda holiday. He’s really Martin Ehrencrona, the guy that played guitars on Hello Saferide’s “My Best Friend”. This is followed by “Ipod X-mas” by Ms Norlin and Co. Quite possibly the best festive romp since “Merry Christmas (I Don’t Want To Fight Tonight)” and tied with The Raveonettes "Christmas Song". The Thousand Dollar Playboys have a countrified Pink Floyd thing going and what can you say about The Soundtrack Of Our Lives? “Jingle Hell” sounds like The A-Bones and manages to channel in “Surfin’ Bird” via ouija board or some such device. South Ambulance have created a tune worthy of The Shoes in "Hangin' In A Tie". I have no idea who they are or where their name comes from but those drums rock.

More HS alumni, Firefox AK (& Tiger Lou) and Maia Hirasawa bring a quieter, more reflective interlude with “Christmas Eve” and “You Were All There” respectively. Something of a breather from the grandeur of the general janglefest. The singer in The Tiny reminds me of Noosha Fox. I guess you have to be of a certain vintage (i.e. – old) to recognise that.

ONIC1 is a pure pop feast that you’ll be able to spin long after the tinsel and parcel wrap has been consigned to the cupboard for another year. Order it here now and it’ll be with you in plenty of time for the holidays. "God Jul and (Och) Ett Gott Nytt År" to each and every bloody one of yer! I hope that there'll be a Vol. 2 next year and I'm writing a letter to that Santa feller in the hope that the HS track will be made available on 7" vinyl for next year.

In keeping with the season, The Come-Ons have a message for you…

“we have some Christmas songs available for download on our website NEWS page. Hope you have time to check them out. The only catch is you have to make a $2 donation to charity.”


But it’s for a good cause, help some of Detroit’s finest make a difference.
Posted by Lindsay Hutton at 1:09 PM No comments:
Newer Posts Older Posts Home
Subscribe to: Posts (Atom)