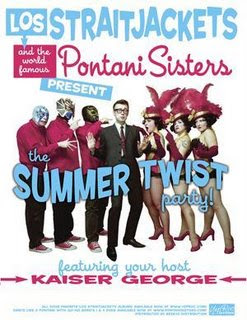 LOS STRAITJACKETS are back!

Posted by Lindsay Hutton at 11:41 AM No comments:
THE CAMEO CINEMA HAS BEEN SAVED...

"The Cameo today (16/8) is celebrating the 20th anniversary of its Grand Reopening in 1986. Founded in 1914 as the King’s Cinema, it was bought by cinema pioneer Jim Poole under whose ownership it was refurbished and opened as The Cameo, Scotland’s first arthouse cinema, in 1949. He ran it until his retirement in the early 1980’s. It reopened on 16th August 1986 when it played ‘Heavenly Pursuits’.
Tonight The Cameo continues its tradition of championing independent cinema with screenings of the highly anticipated "Summer Palace" and "The Host" from the Edinburgh Film Festival in its glorious neo-classical Screen One. In Screen Three, Ken Loach’s "The Wind That Shakes The Barley" is still enjoying popular success in the eighth week of its run at the cinema.
The Cameo is also celebrating its future. The ‘for sale’ boards have come down from the front of the building and the business of serving the local community with the very best film from around the globe is continuing as normal. Recent plans to sell the site or to develop screen one into a multi-use venue have been shelved, and on the back of strong local support operators City Screen have now committed to keeping The Cameo.
A process of discussion with the local community and interested parties is underway to create a plan for safeguarding the cinema’s future. With public support, City Screen hopes to raise funds to implement a major refurbishment programme to improve Screen Two, the foyer and the toilets.
Ian Hoey, The Cameo’s General Manager commented: “On this, the 20th anniversary of the Cameo's rebirth, we are delighted at the news that we are to be removed from the open market and will continue as a key site in the Picturehouse network of classic cinemas. The Cameo has been functioning in an atmosphere of great uncertainty for many months and it is a credit to the staff and the support of the public that it has performed consistently well in the midst of the highly competitive market of cinema exhibition in Edinburgh. The Cameo is the historic heart of cinema in Edinburgh and should remain that way for many years to come."
Genni Poole, Jim Poole’s daughter and leader of the Save the Cameo campaign, added: “The Campaign is pleased that The Cameo’s vulnerable state of limbo has been removed. We very much hope that its operators will prove their commitment to the long term future of this very special cinema and build bridges with local people and cinema-goers who love The Cameo for the unique filmwatching experience it offers. It has a special role in the community of Tollcross and residents have been tremendously supportive. We urge people to vote with their feet and choose The Cameo to see films, to ensure that its future is safeguarded amidst the fierce competition of the city’s multiplexes.”
Local MSP Sarah Boyack has also expressed her support: “This is excellent news - the Cameo is no longer up for sale and City Screen have now committed to keeping the Cameo open. We want to thank the local community and the Cameo's fans who have stayed loyal. Without our campaign I don't believe we'd have today's announcement. I look forward to the discussions that City Screen have promised as there is clearly a need for investment in the Cameo if it is to remain an attractive venue and fulfil its potential.”
The cinema is enjoying its role as a central Film Festival venue and is looking forward to a great summer, with Pedro Almodovar’s highly anticipated Volver opening on Friday 25th August. Tickets for The Cameo are £5.90/£4.50 for cinema members and can be booked on 08707 551 231 or online at www.picturehouses.co.uk. Tickets for the Edinburgh Film Festival screenings (priced separately) can be booked on 0131 623 8030."
Posted by Lindsay Hutton at 7:20 AM No comments:
Newer Posts Older Posts Home
Subscribe to: Posts (Atom)