Posted by Lindsay Hutton at 7:46 PM No comments:

The only guff thing about going away is that you have to come back. And that means dealing with the stuff that you procrastinated with prior to heading into the sunset. A Groundhog life and we ain’t talking Tony McPhee here. Nor is that rhyming slang although I imagine it could be. So yeah, high jinks wis had in “The Madrid” – let’s take it from the top.

The air traffic control tosspots out yonder in Patrickland did their utmost to harsh the mellow but it just amounted to delay. Some poor buggers suffered full on cancellation though. It looked a little bleak earlier last week when I got the e-mail warning of the disruption. At this point, with the world going to hell in the proverbial woven accoutrement, I’m not sure what strikes prove other than that they manage to fuck people up going about their business. There has to be a better way of sticking it to the bastards that got us into this shit and I’m fairly sure that it’s nothing to do with stopping us getting from a to b or even c. I can think of a word that begins with that last one which applies to individuals like those air traffic controllers.

In the end I was maybe 4 hours late and wasted no time in heading round to Munsterville to check in with the troops. Just the day before, I’d learned that Redd Kross and those Hoodoo Gurus were playing that night. Note to London, NY (and elsewhere), the Gurus are headed your way. Master of Ceremonies, Francisco had everything under control as always, leaving Iňigo and I to have the first aperitif of this trip. Jorge held the fort with some of his compadres and I had every intention of meeting the lovely Ulla for breakfast around 8am on Friday morning but we’ll get to that. 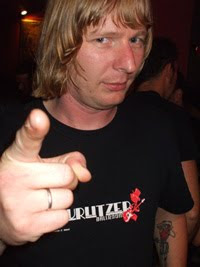 The show was way across town in a place called Rock Kitchen. It was possibly once a cinema that turned into a disco. Someone mentioned a salsa club if I recall. Good sight lines and to my mind good sound. Halfway back on the floor, I distinctly heard the frisson of guitar in “I Want You Back” and “Leilani” was simply amazing. The audience is always what makes a show in Spain special. To hear them sing “Stoned” or “Pretty Please Me” or “Annie’s Gone” is to wonder what a world would be like where stadium crowds across the world did likewise instead of worshipping O-arse-is. We got “Blow You A Kiss In The Wind” but not “Zira”. Possibly just as well. Band of Gold got together what seemed like the ultimate fantasy bill. And made it happen. 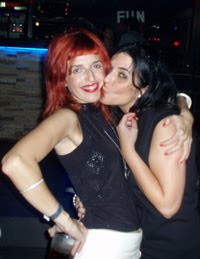 Grand to see the YFF team and Mark Arm and to make the acquaintance of my friend Maria for the first time. Her capacity for this rock’n’roll stuff is really something. After the show, she took me to Funhouse with some of her crew for a real cool time that involved drinking and dancing though not necessarily in that order. This would be the first 5am stint of my visit and the joint was still jumping (what’s Spanish for a stay behind?) when I left. Your reporter had been on the go for 24 hours at that point and I had a breakfast date coming up in just a few hours.

Had a powernap as opposed to sleep and I was just about 15 minutes late to Munster. I think this was the day that I met Murky, King of Shellac and much more just at the corner outside in what you could call an example of very perfect timing. Ms U and I caught up in a cool place just around the corner and all too soon she returned to work as I hauled it back to the hostal in a bid to get some actual kip. Must have been moderately successful but I was soon back at Munster ready to go again. Several wee beers were quaffed ahead of the arrival of team Dahlmann and it was quite a pleasure to see them play their first actual show ever in the first city of rock’n’roll. You’ve heard me banging on about The Wurlitzer Ballroom and you’re probably sceptical. All I can say is you have to go there. The atmosphere is utterly unique. My friend Sara puts it like this... 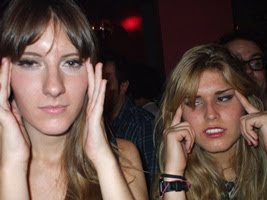 “Wurlitzer is like the bar appearing in the film From Dusk Til Dawn, where Salma Hayek dances sexy and then everyone is a vampire!!”

Cracking Chinese food courtesy of Capt. Alvaro ahead of the shindig meant that some ballast was provided for what would be a booze marathon for a general lightweight such as myself. The band did great and I hope that they’ll get crack-a-lackin' (thanks F) on their debut album so that the rest of the world can see and hear their pop thrust. Seb Dahlmann is but a nipper, albeit a tall one, and he had just been drafted in but you’d never have known. I think Andre’s religious icons would be proud. 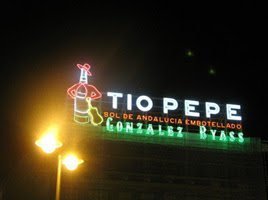 So there was much revelry after the set. For me it lasted to the requisite 5AM and I began to buckle. In order not to miss the bulk of the next day I made an executive decision to stagger back to my billet in the glow of the Tio Pepe sign. Maybe I stopped to get some pizza, don’t remember. The Jager can do that to you.

Saturday would be a relatively quiet day but one that required some stamina because it was to last deep into Sunday. Great to hang out with the Pastors and from there it was time to go hook up with the Dahlmann posse to make plans for later in the evening. Met up with Field Marshall (Simon) Birrell and he took us to the area where we’d hook up with Eva, Murky and Jorge for a taste of real Madrid (nada to do with football).

This was one of the great experiences. Top company, food, drink, environment, everything. I could quite happily ride that particular roundabout for eternity. Couple shots of Mama Juana (rhymes with whammer jammer) for the road to the Murkster’s lair where there dwells music that the world will hear one of these days. Talk about a laboratory of sound. What great kids! 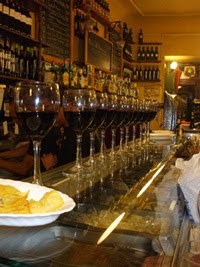 If you find yourself in this amazing city then you gots to go to these places...

So where did we end up you’re probably asking yourselves... see if you can guess? I slept until after noon on the Sunday having been smashed in the most pleasant of circumstances.

Went for a long walk to clear the heid, ahead of the arrival of my next compadre to make the scene. Mr Claessens hit town for the YFF show on the following Tuesday that I would sadly miss but I think I was doing, am doing pretty good. We had a couple of snifters, called by Inigo’s to be treated to a percussion set by his son Gari and headed off to wait for The Twisteroos who as it turned out had been stopped by the fuzz en route from Barcelona. This ended up causing a delay and more of those aperatifs. Met Marco, head honcho of Ghost Highway Recordings. Proud purveyors of serious rock action in 7” slices. What a great guy, more about their wares after the logbook entry.

So they eventually got to town after Jonathan managed to persuade the law to let them continue rolling down the highway. Ice t has an expression that we might employ at this point. Didn’t he use it in a Body Count song? It was great to see them roll out of the van because that meant game on! 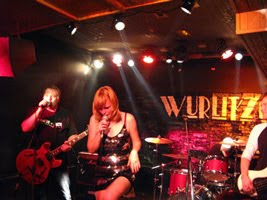 Don’t recall who the band was that opened but they were good. I’ll update this when I find out. The T’s had no soundcheck, they just came out and blasted forth. This is rock’n’roll that covers all the bases that reaches the parts that most simply don’t. You know what they say about pictures vs words. And afterwards, Vibeke and I did a little tag team DJ stint that was so much fun that we’re planning to do it all again although sadly not in December like we figured. It was the perfect end to a rip-roaring few days and this time I definitely did have pizza as did the others. 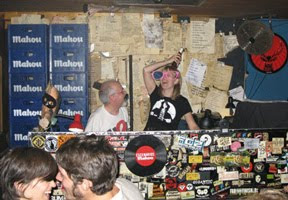 I retired and hit the digs at 5.49am, to be up again and out by 8am. Rolled around to say my goodbyes to the earlybird Munsters, had an orange juice for the road with Iňigo and checked in with Jonathan who looked way less shell shocked than he had the night before.

From there it was time to head for the aeropuerto toward reality. I was pretty much hornswaggled but I’d do it all again in a heartbeat. And I will. I’m sure there’s a lot more than this but there’s an aspect of if you remember you weren’t there to all this. Sorta like the sixties condensed into 4 days. Madrid is good for what ails you. Me certainly.

Thanks to the crew (they know who they are) and all the folks I met for the first time. Hope it won’t be the last. There are too many to list here but special commendations to Benito, Helena and Alvaro for providing the activity room. 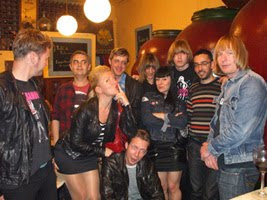 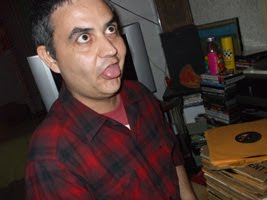 Photos by me except the Tio Pepe and Twisteroos - courtesy of Mr Christophe Claessons of the Antwerp parish. CC runs Universal Trendsetter .

Mary and Maria at Funhouse courtesy of Ms Maria Bonet