Whilst in STOCKHOLM... don't forget GEARFEST! 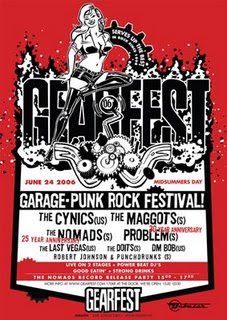 Posted by Lindsay Hutton at 2:35 PM No comments:

Proving that there’s a chasm of difference between groups that walk and talk it and those that posture. The Phobics are firmly in the “they mean it” category. The “Down And Out in Deptford” EP should really be a great lost 7”. Like Stiv fronting Sham 69 blurring the line between punk rock and teen glam thunder like the fabulous Newcastle ensemble 16 Forever. This East London combo deliver a stonking line in faster and louder. Keep yourself in check during the title track, the urge to throw beer around the immediate vicinity will be great. Prepare to get your hearing gear around something that is both authentic AND good.
Posted by Lindsay Hutton at 2:06 PM No comments:

Max Greene is the alter ego of Rod Hohl, sometime collaborator with Mary Lee Kortes (she appears on the track “Images Of You” and many other NY based musicians. “Visiting Hours” is a solid, understated collection of songs that flit between a folk and country vibe. His voice reminds me a little of Paul Simon and these are Sunday morning tunes to be sure. Gentle but memorable. Check out the info, etc. at Surprise Truck.

Keeping up the MLC connection, Mezzrow is the project of Smash Palace drummer, Anthony Bezich and not to be confused with Japanese noiseniks, Merzbow. If you send your mum to pick up an album by either then depending on which you're after - you could be in for a fright. Anyways, this is latter day Anglophilia from South Philly. Pretty accomplished and already lauded by the Not Lame seal of approval.

All original material too which further goes to show that those Americanos can still twist that Brit blueprint into something eminently more interesting. Anybody who ever had a thing for those Dwight Twilley albums could do a lot worse than check these guys out. “Pictures” might nick the general harmonic of “Let’s Spend The Night Together” but what the hey. These is youngsters enjoying themselves in the good old fashioned sense not trying to be urban or any of that pish. Apparently this is to be released in The Phillipines sometime soon.
Posted by Lindsay Hutton at 1:02 PM No comments:

1001 Real Apes isn't an oddity or a novelty. It's composed of monologues based on the stories gathered by David Greenberger during his work at the Duplex Nursing Home in Boston. These have been set to music by Birdsongs of the Mesozoic and this adds a cinematic feel. Like they should be accompanied by film. Maybe film of the people who told them, or situations that they fit but this is a pretty moving experience no matter how you call it. Real life is like that but this isn't an outsider project. The contents "meander, as minds tend to do" and David has been careful to present these verbatim. Maybe some of you aren't familiar with his publication which is 25 years old right about now, "The Duplex Planet"? If not, then check out the site and you'll get a feel for where this all comes from. You have to experience it and react to it yourself, I don't think the figurative clout around the head can really be described in words, particularly on a screen. It's very tactile and this kind of "stream of conciousness" conversation sure makes a lot more sense to me than all the soundbite bullshit that we're presented with on a daily basis. BOTM present the perfect mood backdrop to Greenberger's rich oratory in every case just like it was scored by Bernard Hermann moonlighting with MX80. Please investigate this, it'll take you on an unexpected journey where life might not be beautiful all the time but where the warts and all are part of the landscape. "Obstacles of life" indeed.
Posted by Lindsay Hutton at 11:18 AM 1 comment:
Newer Posts Older Posts Home
Subscribe to: Posts (Atom)